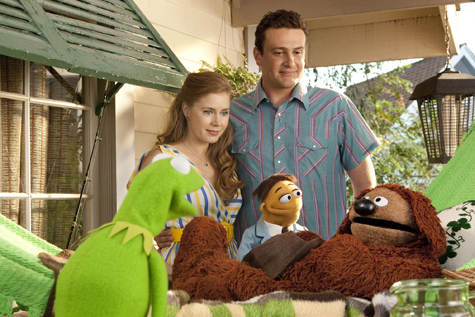 They certainly don’t make them like they used to. The Muppet Show ran five seasons between 1976 and 1981 and brought a rare kind of experience into American homes. Not since The Flinstones beforehand (or The Simpsons to follow) did a program have the ability to stimulate the minds of children as well as tickle the funny bones of their parents. Though its time on television wasn’t notable in longevity, its influence was far-reaching. The show spawned a series of theatrical releases, the last of which, 1999’s Muppets from Space, garnered very little attention at the box office. Walt Disney Pictures, whose last Muppets film, Muppet Treasure Island, was released in 1996, hopes to revitalize the franchise with the plainly titled The Muppets, co-written by and starring Jason Segel.

True to form, the story of The Muppets is as heartwarming as it is absurd. Gary (Segel) is the loving human brother of Walter, a Muppet. The two live a charmingly perfect life in Smalltown, U.S.A. Though the two brothers care about each other very much, they are not blind to the differences between them. Gary grows up into a man and enters into a wonderful relationship with Mary (Amy Adams) that is about to celebrate its tenth anniversary, but Walter remains forever short and made of felt. One thing that Gary and Walter do share in common is their love for The Muppet Show, which, for obvious reasons, becomes a touchstone for Walter throughout his life. To celebrate his impending anniversary with Mary, Gary offers to take her and his brother to Los Angeles to visit The Muppet Theater, which has fallen into disrepair over the years of neglect. As it turns out, evil oil tycoon Tex Richman (Chris Cooper) plans to buy the studio plot on which the theater stands and tear it down for the oil reserve beneath. Gary, Mary and Walter must then convince the Muppets to get the band back together, so to speak, after many years apart for one last show, a telethon to save the theater that was home to so many cherished memories.

Longtime fans will pick up on all the trademark moments. There’s sharp pop culture satire behind all the singing and dancing. In one such scene, vexed with trying to find a celebrity host for the telethon, Kermit the Frog is seen rummaging through his old Rolodex, scratching names such as Molly Ringwald off the list. There are also the numerous, off-the-wall celebrity cameos–from Dave Grohl to Mickey Rooney; Leslie Feist to Judd Hirsch. Characters often break the fourth wall, such as when Gary acknowledges to Mary that he’d just been involved in a dance number, and that signature self-deprecating wit that has served the Muppets well through the decades–and perhaps even left an indelible mark on a generation of people who prefer to downplay their own accomplishments.

But one thing you won’t find here is any shred of Gen X cynicism. This is a film with its heart firmly affixed to its sleeve–a wide-eyed, unabashed celebration of the Muppet legacy. Not only are the Jim Henson puppets praised for their nostalgic value, but they are also served up as a sort of tonic for the state of entertainment today. The top-rated show on the network that hosts the Muppets’ telethon is a game show where teachers are punched in the face by students. Also in the film, Richman strikes a deal with The Moopets (a satire within a satire), Fozzie Bear’s ex-backing band while he was performing in Reno, which Richman calls a cynical act for cynical times. The Muppets Vaudville-style comedy show may be old fashion in comparison, but it proves to be timeless.

Segel and co-writer Nicholas Stoller’s (Get Him to the Greek) script is fawning in its love for its puppet subjects, but it is also clever, engaging and hilarious at times. The songs too, as bright-eyed and bushy-tailed as can be, also have an underlying wink and nod that will delight audiences on multiple levels. Will The Muppets propel the title characters back into the spotlight? Maybe not, but you really can’t fault Segel and company for trying.