You Know I’m In Love With An Uptown Girl: Trainwreck

I really don’t watch Comedy Central anymore. I’m also not real big on stand-up comedy aside from a handful of favorites. So until Friday night, Amy Schumer was more or less just a name to me. But now I feel like I’ve known her for years. We’re old pals, in fact. She’s 34. I’m 32. Know each other from the bars. Used to write for the same shitty paper. Spent a night together that neither of us remember. It’s Trainwreck, folks, and maybe you too can relate.

Directed by Judd Apatow (40-Year-Old Virgin) and written by Schumer, Trainwreck tells the story of, well, Amy, a heavy-drinking, sailor-talking, perpetually single 30-something living in New York City. Her life revolves around writing tabloid think pieces for a highfalutin rag, getting drunk any given night of the week and henceforth fucking whatever man she feels, only to leave said man high and dry. Her sister, Kim (Brie Larson), is a happily married mother-to-be that loves her lil’ sis, yet grows more and more tired of her debaucherous and destructive lifestyle by the day; a lifestyle which she inherited from her philandering, alcoholic father (Colin Quinn). While thus far I’ve seemingly described a drama, I assure you it’s not: This is a raunchy comedy that takes a cue from Bridesmaids, with conventional Hollywood stereotypes of women thrown out with the bath water. But Amy’s relentless commitment to the single life is turned upside down after meeting Aaron (Bill Hader), a doctor of sports medicine she’s unwillingly assigned to feature for the magazine. Amy and Aaron, polar opposites in their approach to life, go on to find a common need in one another, forging a tumultuous yet endearing romantic relationship.

I’ll admit that nothing about that storyline is groundbreaking or new, and I’ll also say that initially, Trainwreck feels like a woman-driven version of The Hangover; by that I mean an endless and boring parade of cock and pussy jokes. But that changes as Schumer’s writing begins to not-so-subtly mock the absurdities of a hardcore stag life, from the ridiculous trouble of staying the night, to the audacity of a new sexual partner making verbal contact the day after. And while Amy’s bachelorette habits are exaggerated to a point that goes well beyond the routine of your average single person, there’s plenty of truth-by-experience seeping through, and it’s infinitely more intriguing from a woman’s perspective. (Say the main character was Vince Vaughn, or something; I’d have hit the exit within 20 minutes.) Being mapped out as a flawed and hurtful maneater bargaining for her own moral comfort feels by design, and the consistent stabs at introspection once Hader’s character is introduced do not go unnoticed by any person with a sense of self that’s ever lived the single life to a fault. 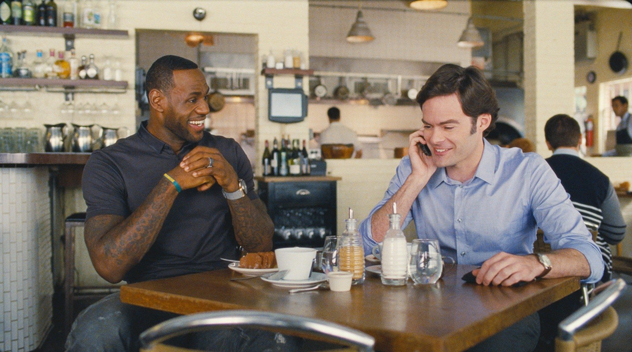 Hader, for his part, is excellent in a heretofore unknown capacity, that of a love interest. He’s a genuinely good actor, and sells relatable romance in a way your average rom-com hunk does not. Which brings me to another point: Both Schumer and Hader are unmistakably attractive people, yet neither is some sort of pinup. There’s something refreshingly attainable to their looks for those of us not quite on physical par with Ryan Gosling or Margot Robbie.

Jesus, I’m really selling this thing as some sort of social statement. I swear it’s not that serious. Hell, LeBron James has a starring role. For that matter there’s appearances by Amar’e Stoudamire, John Cena, Marv Albert, Tim Meadows, Chris Evert, Matthew Broderick, Method Man and the New York Knicks cheerleading team; how serious can it really be?

Trainwreck is anything but a perfect movie. The humor is at times very base; it’s too long; there’s too many cameos; yada, yada, yada. But it’s also quite funny in both crude and cunning ways. The acting is good. It features prominently my favorite Billy Joel song. It’s an enjoyable and relatively unique spin on the throes of deep singledom, pinching your hopeless romantic but not breaking the skin. “You mean to tell me there’s someone out there I might actually want to date that also wants to date me and not just when we’re drunk and looking to screw? Whoo-boy I’m gettin’ drunk tonight! Yeeeeeeehaaaaawwww!”

Who the fuck said that? Certainly wasn’t me.