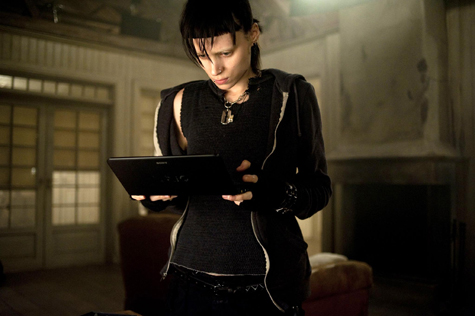 The Girl with the Dragon Tattoo

It feels like a cold, hard winter without the kids from Hogwarts to bring children of all ages out to the cinemas, and the first installment of Peter Jackson’s The Hobbit is still over a year away. For those in need of a literary hero translated to the silver screen, Sony and MGM offer Lisbeth Salander from the frozen north of Scandinavia. She may or may not be good with a wand or sword, but she has a whip-smart mind and is lethal with a Taser.

The Girl with the Dragon Tattoo was the first in a trilogy of novels written by Swedish author Stieg Larsson. It was a wild international success throughout Europe, and even spawned a trio of foreign films starring Noomi Rapace (whom U.S. audiences can see in this holiday season’s Sherlock Holmes: A Game of Shadows), all of which were released in 2009. Now, TGWTDT gets a well-deserved American remake–sort of–with Rooney Mara cast in the lead role opposite the most recent James Bond (Daniel Craig) and The Social Network director David Fincher at the helm. It’s the making of a perfect event film, the kind that you’ll discuss over the water cooler at your office on Monday, but if you’re expecting the usual Hollywood-style big action flick, you’ll be sorely disappointed.

Craig plays Mikael Blomkvist, a disgraced journalist who is hired by Henrik Vanger (Christopher Plummer) to supposedly assist in writing a memoir. In reality, Henrik requires Blomkvist’s help in investigating the murder of Harriet Vanger, Henrik’s niece, who disappeared some 40 years ago. The investigation brings Blomkvist to an isolated island in northern Sweden inhabited by the Vangers and reveals the rich, reclusive family’s tortured and sordid past.

It turns out to be a difficult job, one that Henrik has more or less resigned to be futile. But when the trail proves warmer than anyone had thought, Blomkvist seeks help with his investigation. He eventually gets hooked up with Salander, whom the Vangers had hired to investigate Mikael before hiring him, and the two delve into a world full of Nazis, betrayal and Bible-thumping serial killers.

TGWTDT is the sort of movie that grabs you by the nostrils and shakes you around–at times quite violently. The frayed relationships between the members of the Vanger family–i.e. who refuses to speak to whom–is as difficult to keep track of as the myriad character names. Blomkvist even makes a wise crack about that very predicament as Henrik gives him a breakdown of the Vanger family tree. On top of that, the film hops back and forth between Blomkvist and Salander’s disparate plot lines, with him hot on the trail of an intricate mystery, and her forced to perform despicable acts in order to survive as a ward of the state. Fincher is asking you to trust him as he bombards you with twisted layers of intrigue, a menagerie of characters and scenes of violence that are difficult to sit through, without giving much of an indication where it all might be heading.

It’s a leap of faith, but luckily it turns out to be a rather rewarding one. The mystery that is at the film’s heart unfolds with great suspense, and once Salander and Blomkvist’s paths finally intertwine, TGWTDT bursts with frenetic energy. Craig and Mara are fantastic together. An odd couple of the highest order–he is clean cut, professional and cosmopolitan while she is donned always in black, her face pierced and shock of jet black hair–the two characters actually share a similar lost-in-the-woods quality. Blomkvist sees his career in ruins and is engaged in a long-standing affair with his boss, a married woman; meanwhile, Salander is a chronic outsider who craves a real human connection more than she’d probably like to admit.

To the film’s credit, the resolution of the mystery doesn’t mean the end of the characters. There is a long epilogue that follows that wraps up most of the loose ends while creating others. What all this does is make for one hell of a long movie–nearly three hours!–but there’s no reason for that to deter you. Get comfortable and enjoy. Baby, it’s cold outside.