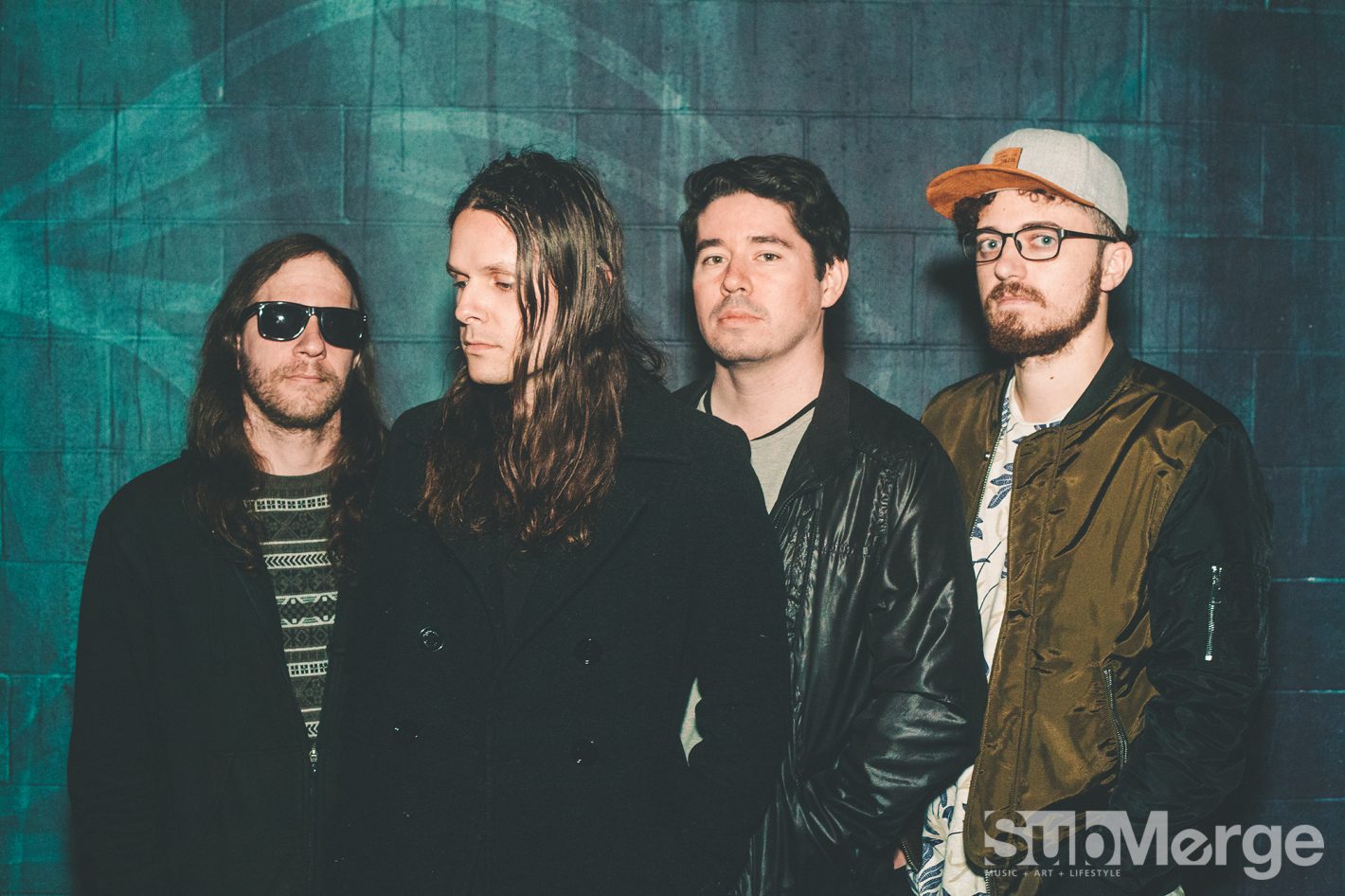 When listening to Death Party at the Beach’s eponymous first EP, it’s hard to believe the band was actually a one-man project during the time of its recording.

Lance Derouin played in bands in Sacramento and San Diego before he realized he wanted more creative control of his music. That’s when he created Death Party at the Beach.

“I got into a band with Jesse [Mancillas] from Cemetery Sun, but we only played two shows or something like that,” Derouin said in a recent interview with Submerge. “I was just the singer of the band, I didn’t write any music, so after that I just figured, ‘OK, I need to just start something from scratch myself,’ and I started just writing everything. That’s kind of what the first [Death Party at the Beach] EP was.“

Looking to round out the sound and play live shows, Derouin decided to add members to the project.

“After the EP, I got together with Nate [Webb], our guitar player. He and I were a two-piece for a year and a half or so,” said Derouin. “Later we looked for other people and found Aaron who was in the same practice room two doors down.”

With the addition of current band members Kevin Stefanescu (drums) and Aaron Aparicio (bass), Derouin decided to share creative control of the music. That’s when Death Party at the Beach’s sound came alive.

I was able to sneak a listen to a couple of songs from the new EP, Absence, and right away, you feel how much the music opens up, allowing for each member to accompany each other’s contribution. The songs feel less frantic than those on the previous EP, which adds a new depth to their sound.

Recently, I sat down with Derouin and Aparicio to discuss the new EP, how the writing process has changed once members were added and, of course, their upcoming release show with a DJ set from !!!.

Death Party at the Beach has seen quite a few changes since its conception. Are you looking to add any more members?
Lance Derouin: The dynamic we have now is perfect. What I wanted when I started this was to have it be a real, live thing and it’s changed as well. Everybody contributes to it. Aaron plays guitar on one song, but he plays bass on most of the other songs.

Are you guys switching instruments at live shows?
Aaron Aparicio: Yeah, it’s more of a recent thing. With the drummer we have now, it makes it so all four of us are multi-instrumentalists, and we can all sing, so it’s great when we get to jam and write.

When writing new music, do you guys want to stay consistent with the sound of the first EP?
LD: From the way we sound on the older EP to how our next EP is going to sound, it’s going to have familiar elements, but it’s going to have more of a whole band kind of vibe.

How was the songwriting process different when writing Absence?
AA: Well the first EP was Lance in his bedroom, recording all of the vocals in his closet.
LD: Yeah, I did all of that myself and I sent it off to get mixed and mastered but the first EP was all me.

All of the Instruments?
LD: Yeah, everything.
AA: Yeah, that was the first thing I heard, a couple tracks off of the first EP and that’s what sold me to play with them. But yeah, there definitely is a feel from one EP to the other.
LD: Usually you know exactly how you want a song to sound when you are doing everything by yourself, but when you get other people involved things fluctuate.

Lance, how was that change for you?
LD: It has been a little bit of a transition, but at the same time it takes some of it off of me. If I like an idea or something, and if the rest of the band likes it, too, it’s nice to get other input because you can get kind of obsessed about something when you’re doing it by yourself.
AA: I think our songwriting has been cool. It’s been a group effort. We send stuff to our collective Dropbox all of the time, whenever anyone has an idea. We chat everyday or every other day, and it has been really cool hearing everybody’s individual ideas for a song.

Do you guys have a general structure when writing? Does everyone write their own parts?
AA: It depends. On the track “Losing Sleep,” I came in with the rhythm and lead and Lance altered the rhythm a little bit.
LD: Yeah, we wrote each other’s parts actually.

The lyrics on the newer tracks sound a little more personal. Have there been any changes to your writing style?
LD: There are, yeah. “Overnight” is particularly personal. It’s funny, too, because you can apply that song to any situation. I mean, it was written about somebody, but it’s cool that it can be about anything, too. I like to write songs that are personal to me, but at the same time somebody else can connect to it as well.

Does Lance write the majority of the lyrics?
AA: This isn’t a bad thing, but I don’t think Lance has ever run the lyrics by us, but I don’t care.
LD: Yeah, but Aaron is pretty good at telling me things like, “This could be sung a little better,” or he’ll ask, “What’s going on right here?” and I trust his opinion. In a way, he’s kind of producing me. He has a good ear for stuff that maybe I’m not hearing at the moment. That goes for all of us. I trust everyone’s opinion 100 percent. I feel it’s not just about me, even though it started out that way.
AA: There are a lot of opinions flying around the band, but it’s never personal. Everyone has the song and the band’s interest at heart when we are critiquing each other.

Are you guys looking to go on tour to support the new EP?
AA: Since we’ve gotten this group together, me, Lance, Nate and Kevin, we’ve been playing a lot more out-of-town shows. Mostly in the Bay Area, but we’ve been getting a pretty good response there. We would like to go to L.A. and play with friends down there. We haven’t been on a tour yet, but we have been talking about what we want to do as a band after this release show. I think our goal is in the springtime to at least do a West Coast tour from Seattle to L.A.

Where did you record the new EP?
AA: We recorded in a couple places. We recorded with Ira Skinner at Gold Standard. It was a really great studio. He definitely helped us out while we were recording. He wasn’t our producer, but I think he was still enjoying the music and gave us good insight on tones and stuff. He’s a really good engineer to work with. Then when we decided to move up our time schedule, we took what we had worked on with Ira to my friend Mika Whitfield who has a nice home studio in Sacramento. We had basically open availability at his studio, so having that and not worrying about how long we were there definitely helped when we were trying to hustle.

It seems like you guys are pretty excited about your upcoming show at Le Twist.
LD: Yeah, we got offered the show and I thought, “We probably should make this our EP release because it’s such a great opportunity!”
AA: The aspect that it is free is cool, because we want people to spend money there enjoying themselves, and if they like the music it will be out. Also, that way we can get as many people that want to come to come.

Did committing to the show move up the release date at all?
AA: Not to put it out sooner. Before we were offered the show, we were already in the studio mixing and going over the tracks. Once we figured out if it was a full length or an EP we said, “OK, we need a time table of six months.”
LD: Yeah, Aaron said that and it made us hustle, and now the show happened, which is making us hustle even more.

Death Party at the Beach will unveil their new EP Absence in style at the Le Twist Holiday Party at LowBrau (1050 20th St., Sacramento) on Dec. 19, 2017. The show is free and starts at 9 p.m. Death Party at the Beach will be performing in support of a DJ set courtesy of !!!’s Nic Offer and Mario Andreoni. To get a sneak peak of the band’s new album, go to their website (Deathpartyatthebeach.com) on Dec. 12 to stream a single from the EP.