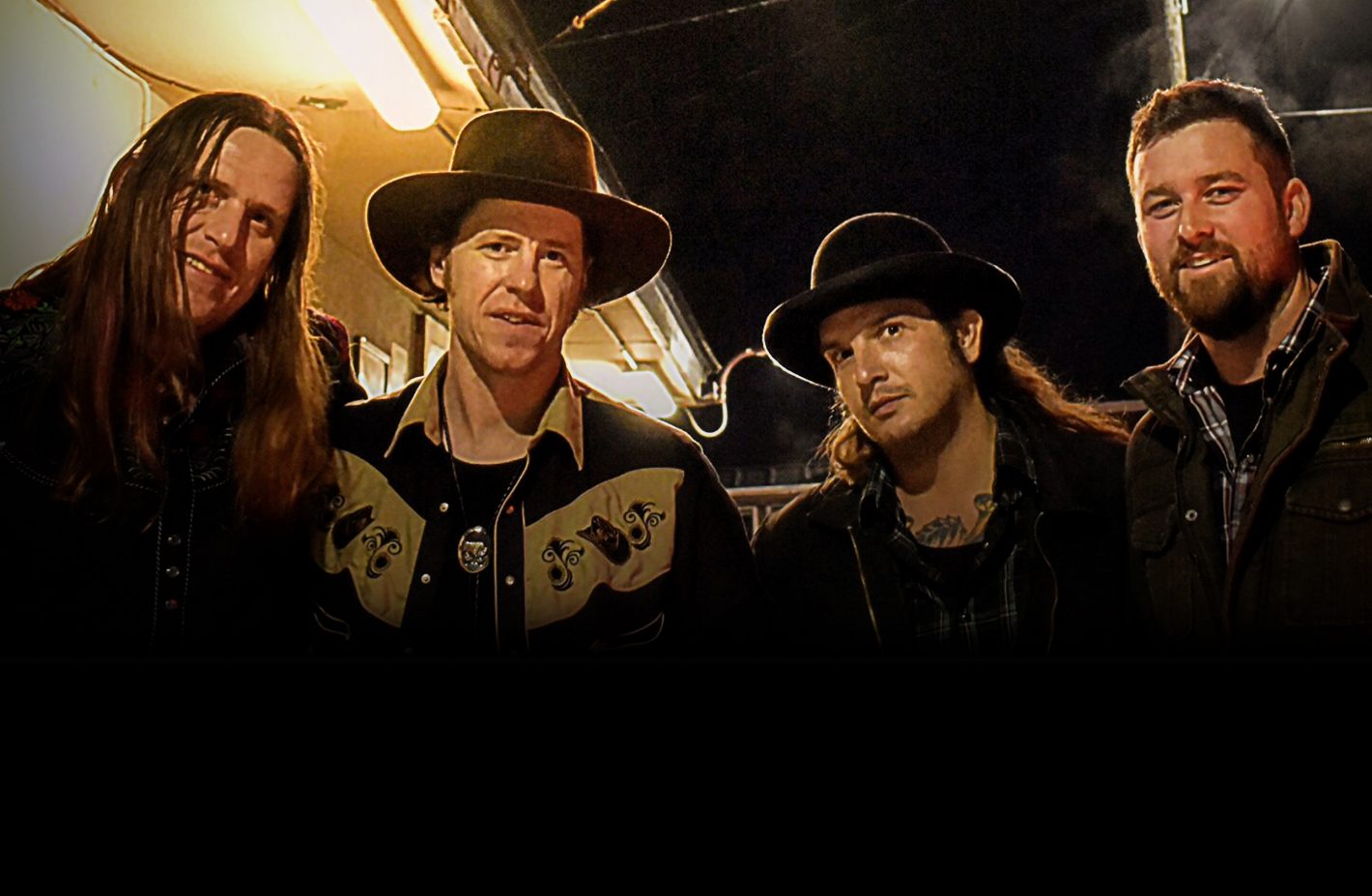 Monopoly capitalism poisons everything. It has turned Hollywood into a sequel/reboot machine. But it goes further than that. Our food is garbage; our elections are farcical, and even the drinking water isn’t safe to drink. Rock ‘n’ roll was once the fertile soil for all sorts of rebellion, but overproduction and an influx of talented but vapid one-hit wonders have stolen that from us, too.

But Neil Young promised us that rock ‘n’ roll would never die, and he’s right. At least I think he’s right. There are still a handful of real-deal, unadulterated rock albums released by people with calluses on their hands, and, in that vein, the Damn Liars are honing the craft like few others. The band consists of veterans Chuck Bradley on vocals and guitar, Dan Sisson on guitar, Bob Jr. Dickson on bass and Justin Mellor on drums. Going to a Damn Liars show is like traveling back to a point in time before corporate rock ‘n’ roll, when the air was full of simple, sincere rock. Their music evokes mid-century, American working-class rock—straightforward lyrics, uncomplicated guitar riffs and incredibly well-written songs.

I read in a press release that they called themselves “The Most Honest Band in Rock and Roll,” and I was ready to needle them about it, thinking it was just a play on the band’s name, but I was wrong. I sat down with drummer Justin Mellor and singer/guitarist Chuck Bradley and was dying to ask them about it.

I read that you guys are the most honest band in rock ‘n’ roll. Where does that come from?
Chuck Bradley: We’re not trying to reinvent the wheel, we’re just trying to play really good rock ‘n’ roll that’s familiar to people and is fun to listen to, and channel all of that into a great live show. For us, that’s where the honesty comes in. We’re not gonna try to fool you with smoke and mirrors, we’re just gonna come out and play you some good music.

Rock seems to have become pretty stale in the past decade, do you see yourselves as trying to take it back?
CB: Yeah, that’s the whole point. For a lot of years, everyone wanted to be in a blues band, and then you had people wanting to break away from the blues and try different stuff, which is cool, but we got to the point where we missed those building blocks of rock ‘n’ roll. So we’re taking it back to the basics of not trying to play a million chords. We wanna play the ones that matter. We want to try and strip it away and do just what it would have been in the beginning. Maybe in a fresh way that means something.

You guys do some cool covers and seem to have really cool taste. What do you listen to?
Justin Mellor: I started out doing heavy metal and punk and hardcore, and I still listen to all of that stuff. As I grow, I’ve been listening to a lot of older country and bluegrass and a lot of different stuff. My favorite band is The Refreshments, but I also derive a lot of influence from Megadeth. I love stuff like that.
CB: That’s part of stripping it down—when you do that color or that little drum part, it grabs people because it’s not through the whole song. It counts if it’s well-placed. You [Mellor] are so good at that. The fills that you do and the stuff you do rhythmically always fits into the stuff we’re doing—it doesn’t ever fight with what we do.
JM: I like Dave Lombardo’s [from Slayer] drumming, but when I’m listening to a really good rock ‘n’ roll song, there’s actually not a lot going on, and a good drummer plays to make the people sound better instead of just playing a thousand miles an hour. That’s cool, but it doesn’t really have its place in rock ‘n’ roll.

And you guys use pretty specific vintage equipment. Is that an honesty thing, too?
JM: When you’re an artist, you’re trying to find the perfect color, and when you’re a musician you try to find the perfect tone. When you’re as obsessed as we are, you never quite get it, so you’re always searching. We use a lot of hearty gear. Chuck uses a Marshall amp.
CB: I just got that, I’m super excited about it.
JM: Tube-powered, hearty stuff. We don’t like little solid-state amps that have a thin sound, we want the stage show to sound as cool as the record sounds.
CB: You know, the new amp that I got has bass, mid, treble and volume, and that’s all. It’s made to overdrive the tubes and make that round, three-dimensional sound. Dan [Sisson], the other guitar player, is super into that, too, and when I started playing music with him, he really revolutionized that for me. Having a guitar tone come from the instrument itself is important, and it’s easier for me. I don’t have to tap-dance on pedals all night.
JM: It’s a house of cards thing. The more stuff you plug in, the more it can go wrong, and it hides the real thing.

It’s harder to replicate live, too, right?
JM: Yeah, and we wanna sound really good live, first and foremost. We don’t wanna be that band that sounds really good on the record and then sounds totally different live. Some bands sound like they have five guitar players on the records and then only two on stage. We don’t wanna be that, because you can get carried away in the studio … You can sound like a symphonic orchestra and you get on stage and it’s just two guys.

You think anyone in particular is dishonest?
CB: I’d hesitate to say dishonest, but there are different approaches. We don’t think these guys are trying to pull the wool over anyone’s eyes, it’s just different. We’re interested in making songs work without 50 million tools to do it. There’s a lot of newer stuff that’s overproduced, in my opinion. I’ll watch something on TV like Good Morning America or Saturday Night Live or something and they’ll have a country band on, and I play pedal steel, so I know that’s a pedal steel lick you’re playing, and I’ll look on stage and there’s no pedal steel player up there, so that’s the kind of dishonesty we’re trying to avoid. We want to have the record sound like we do live, and capturing that honesty is what we’re about.
JM: Nashville has a formula and they keep doing the same thing that sells. It’s all the same two-and-a-half-minute song with the same type of guitar riff and the same structures—even the same back up singers. They have a formula, and to their credit, it sells, but that to me is dishonest, because it’s remaking a fake product. It’s like KMart selling socks, and there’s no difference to them because it’s a product. We wanna do something genuine that’s made fresh and real.

Sacramento seems to be a really good place to do that right now.
CB: I have to credit a lot of the musicians around here. I think as an audience, people recognize when you don’t put effort into what you’re doing, and I think that’s what ends up killing a lot of scenes in a lot of cities, and you have to keep your game elevated.

Do you mean anyone in particular?
CB: Tatiana McPhee put out a great record. JonEmery—he’s so active. He’s always putting out stuff. Shawn Cahoon of Rancho Deluxe—he’s an honest performer, too. He lays it all out and I respect the hell out of him. He’s that guy that no one knows but I respect him so much. He just hops up on stage and rips. Bobby Dickson of Unchained. Matt W Gage just put out a record, [and] he works with some of the greatest musicians. Billy Hood, too. He’s my favorite local songwriter.

When is the record out?
CB: We’re adding some last minute details and our producer is a busy guy, but the digital release will be out by the end of February. We’re gonna push, and I think we’re close. We’re only doing six songs, but we’re doing it well. We picked the six best songs that could run the gamut of what we do. We want this to be kind of like a sampler was in the old punk rock days that says, “Here’s our three-song EP, and this is who we are.”

What about shows?
CB: We’re really fortunate to be able to play at places like the Powerhouse or Goldfield especially because, you know, those level of venues are important for a city to have. For them to come say, “Hey, we believe in what you’re doing, come be on our stage,” we’re really happy to oblige.

Show The Damn Liars you believe in what they’re doing, too, and check them out live at the aforementioned shows at Powerhouse Pub (614 Sutter St., Folsom) on Jan. 25, 2018, and at Goldfield Trading Post (1630 J St., Sacramento) on Jan. 26. Stay tuned for details on their new album by following the band on Facebook.com/thedamnliars.