Looking for Inspiration • The Philharmonik Releases New Self-Titled Album, and Utilizes His Rising Profile to Speak Out 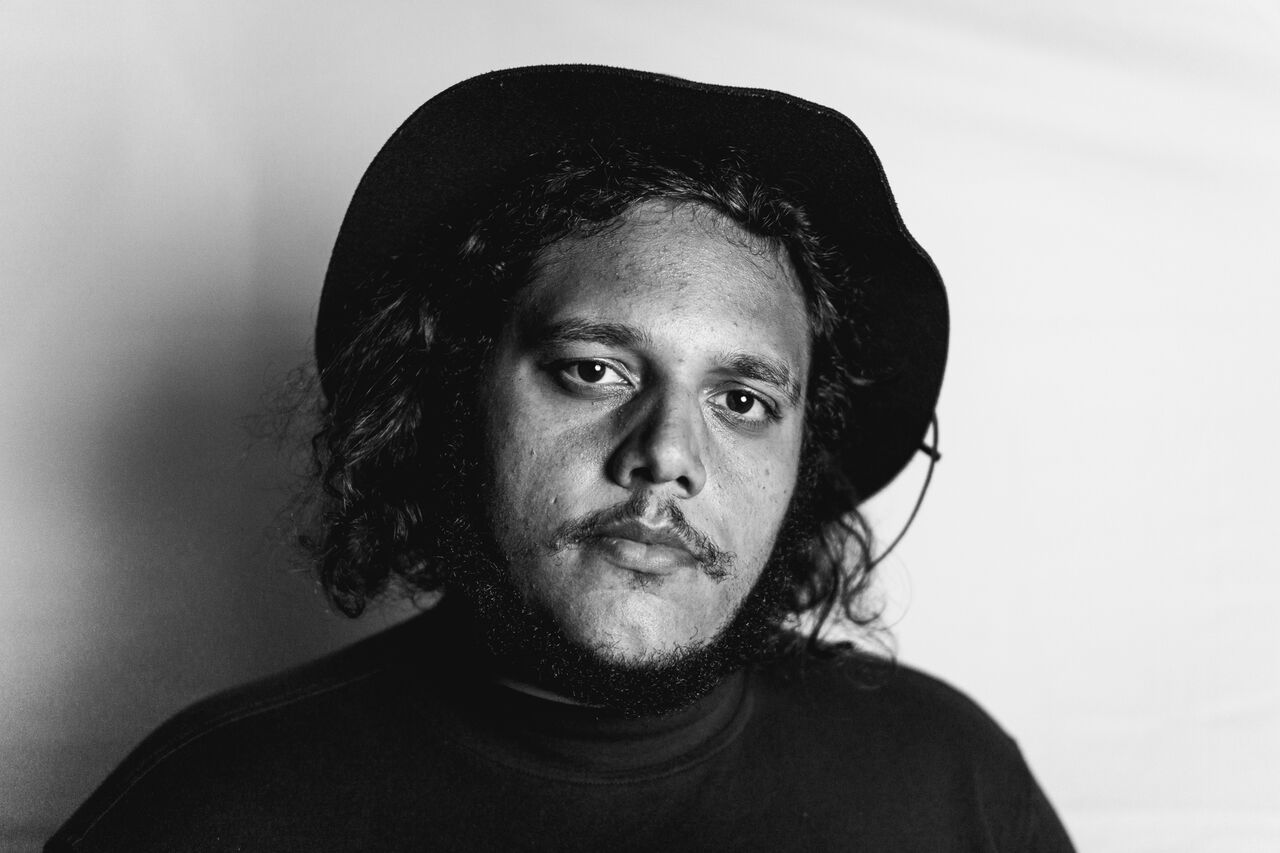 For those unfamiliar, The Philharmonik is a pretty big name in music around Sacramento. His real name is Christian Gates and at 24-years-old, he’s already a multitalented producer, versatile instrumentalist and ambitious vocalist, and at the moment, his creativity knows no bounds. His music is a breath of fresh air in an overly saturated hip-hop mainstream where his deeply personal accounts articulate not only the injustice he sees around him, but also his optimism. Gates finds a way to make the nostalgic traits of each of his songs feel brand new.

On his 2016 rap project, Good People, the beats and content were reminiscent of an Outkast album, but with a Sacramento perspective. Now he’s back to take you on a soul-filled funk quest through his new self-titled album that will be released on March 1. Sonically, it includes R&B, electronic and even folk elements, but listeners may also notice that Gates wants to instill people with genuine hope and bravery.

Gates has been featured on stages at Concerts in the Park and GATHER, and has performed on Good Day Sac, Sofar Sacramento and headlined the James Cavern-hosted Basement Sessions. He has also been featured on websites like AfroPunk.

Gates is working ambitiously to branch out toward something bigger than music, under Sol Collective’s Sol Life record label, he wants to use his platform to help underprivileged communities and make Sacramento truly inclusive.

In recent news, Gates has been in the media for his boycott of Sacramento News and Review’s Sammies, the publication’s annual music awards show. Gates was nominated along with other Sac musicians like Hobo Johnson and Tel Cairo. The show was canceled this year after artists and nominees planned to boycott the event in response to SN&R’s profile of former Sacramento police officer John Tennis, who fatally shot a black man in 2016. Local musicians and activists plan to hold a series of Anti-Sammies events on March 14 and 15 at Blue Lamp, but Gates will not be performing. You can however catch him live at his album release show at Sol Collective on March 3.

Submerge had the opportunity to chat with Gates about his new album, society and his thoughts concerning his Sammies boycott.

We’re excited about the new album release, how long did it take you to get the project together?
I’ve been working on it since July 2016. What’s funny is that I’m always working on music, so by the time my first mixtape [Good People] came out I already had drafts for a couple records that were potentials for this album, but I wasn’t sure. The finished project took about a year-and-a half to two years.

Can you talk about the major differences between Good People and this new self-titled album?
Well Good People was [specifically] a rap album. I feel like that was where I was at [when I made it] … With this album [The Philharmonik] something just came over me where I was going back to my roots with artists I grew up with like Stevie Wonder. All the funk people were in my brain and I couldn’t get it out.

You have a playlist on Spotify titled “My Biggest Inspirations.” I heard Earth, Wind and Fire, and J.Cole among others. But of all the artists on your playlist, Stevie Wonder is on it the most. What is it about Stevie Wonder that resonates with you as a huge inspiration?
He’s just the greatest. His voice is perfect. And the fact that he doesn’t see at all makes it seem like he’s more in tune with the music. He’s just so captivating. He’s just like my biggest inspiration, hands down. All-time favorite.

You open the album with the mellow “Underdog.” But I’m a bit confused on whether the tune is about a single underdog or multiple characters. Can you explain?
It’s everybody. I think everyone has felt like an underdog in a certain way, shape or in life. For me this is how I’ve felt like an underdog. In school I used to get made fun of hella. Just all day getting picked on. I was that guy that would get the most picked on.

On “Pay Me,” your big message is the importance of not being taken advantage of. It seems like you’re saying, “Pay me, recognize me and give me the acknowledgment I deserve.” Is there more to the song?
It’s also my way of saying how much I hate capitalism. I was thinking about having to chase money all the time and the people at the top who have the whole world for them to devour. Is it too much to ask to make enough for me to live on? Like fuck you.

Do you have aspirations other than being a musician?
I want to make a change in this city. Not just like for the music aspect, but just for the community aspect. Because [Sol Collective] they’re doing so much, I want to also pour into that.

Back to the album, is “Momma’s House” [featuring Hobo Johnson] about getting out there on your own?
It’s hella depressing. It’s like at the end of the day, I was a privileged kid. I had a roof over my head and enough food to eat. The only thing was I couldn’t go out much and I had to watch my sister a lot. My mom was single and she had to do the work … The transition into adulthood is very hard. Everybody is getting into debt. The jobs aren’t equating. So on “Momma’s House,” I was like responding to all that by saying, “How the hell do I get out of this?”

“Good Day” is a less upbeat song yet a beautifully piano-driven representation of the challenges you’ve gone through emotionally. You struggle with depression correct?
Anxiety. Yeah, so I wrote that shit at like four in the morning. I couldn’t sleep. I was super fucking depressed. I just wanted to have a good day. Like over the years it felt like it was getting progressively worse especially after moving out. Isolation is almost unbearable.

On “Energy” you tap into your sultry, sexy, and romantic side. Where does that come from?
Incredibly, it came from a platonic place. It’s funny. I just wanted to talk more about just the connection and for me like there are people that inspire that song. Like experiences that I’ve had and I’ve been like wow the energy is really nice here. If you can sit at a bar at Motown Mondays and hold a conversation for the whole duration, that’s a good energy there.

What I get from “Let Freedom Ring” is your experience with racism and injustice from your daily life, or things you see happen to other people, but you sound really confident that there will be better days.
There will be. I wanted it to express how everybody feels ever since Donald Trump has been in office. The racists have definitely come out of the woodwork. So if they are going to come out of the woodwork, I’m definitely going to be more vocal about that shit. I don’t really care who it offends. Like if you have a platform where your voice can inspire people, it’s like your obligation—your responsibility to make sure that the people that are oppressed have some type of liberation in what they hear.

Were you the first to boycott the Sammies this year? Did you know other artists in the community were going to follow?
That shit’s been going on for a while. I’m not [the first]. I just had a big enough platform for people to notice [in the media]. People have been doing that shit [boycotting SN&R and The Sammies] for years … Honestly, a lot of people of color have been boycotting it and were voicing it and have been voicing it. But to be honest most of the white artists that have been doing it [boycotting the Sammies] wouldn’t have done it unless someone really came out the woodwork and really said something about it. And I do feel that way.

So you think it’s a “bandwagon” mentality for certain artists?
I definitely do. I definitely do think it’s a bandwagon. I mean there comes a place where I think racism is wrong, but there’s also a place where now that everybody is on board with this, they are on board, too, because of that. I didn’t give a fuck about any of it. I was like, yo, this is the right thing to do, and if you’re not going to do that it’s fine. But like Shane from Tel Cairo was very authentic [when he boycotted the Sammies]. Like he was ready, he was with me and there were other people that were with me. I felt some of the backlash from it to back down. But I’m not going to back down from it, and I do think we’re going into a good direction. But I think that shit is going to be temporary and I think they [SN&R] are going to revert back to their old ways. At this point I just feel like everything that they do, like the apologies in SN&R have been unacceptable because they haven’t really been apologies.

Are you performing at the Anti-Sammies?
I’ll be at SXSW during that time. The Sammies got canceled. I guess that’s a start in the right direction. But I’m skeptical and think things will go back to the way they were.

Make sure to check out The Philharmonik’s self-titled album, which will be released on March 1 on Spotify, SoundCloud, Tidal and Apple Music. You can celebrate its release at Sol Collective (2574 21st St., Sacramento), on March 3. Tickets are $12, and Jmsey and Sunmonks will also perform. You can also catch The Philharmonik live on March 9 for an intimate show at Gold Standard Sounds recording studio, or on April 13 at Harlow’s (2708 J St., Sacramento) when he opens for Bilal. For more info, go to Facebook.com/thephilharmonik.