TV may be responsible for rotting many brains, but for artist Chad Lenzi, its effect was the opposite

During this month’s Second Saturday I found myself on foot, hiking over to Alley Cuts in downtown Sacramento to take in the art of Chad Lenzi. The artist’s voyage over the last few years has taken him from Sacramento to Los Angeles and back. It is evident that this journey has served as inspiration for his paintings and ink drawings. It is also evident that his art connects with people, judging by the large turnout at his shows. His paintings draw you in by their sometimes twisted, sometimes provocative portrayal of the ‘50s and ‘60s.

Much of his art starts with the pop culture and social influences of his childhood—which include comic books, ‘60s television and the civil rights movement—then veer into his relationships with women and the punk scene of the ‘80s.

Lenzi’s paintings almost always feature a woman in the foreground displaying authority over a scene that is often chaotic. Never does this woman show panic. She calmly assesses and controls the situation with ease.

Lenzi asked me to meet him at the Starlite Lounge in Sacramento, which was fitting since the bar’s mid-century modern theme seemed to place us right in the middle of one of his paintings. The normally soft spoken artist opened up about his family, moving from North Hollywood to the rural town of Courtland and his fascination with fire.

Chad Lenzi will follow up his current exhibit in September with a show at Little Relics at 908 21st Street in Sacramento. 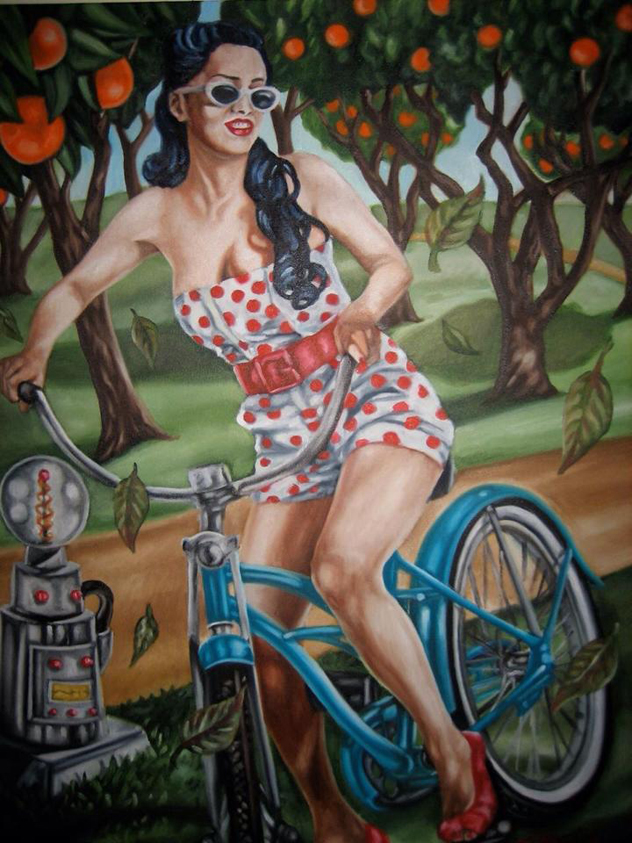 Was there ever a time when you stepped away from drawing or painting?
No, I just kept going. I kept going, because it was something I enjoyed. It was just like riding a bike or riding skateboards; it’s just what I enjoyed doing. Still to this day it’s the only constant in my life that brings me happiness and joy.

I’ve noticed a theme of strong women in your art. Where does that come from?
Growing up in a house with a mother and two sisters, that’s how it is. They rule the roost. I paint women because I love women. I don’t objectify them; they have always been a powerful element in my life. They are not to be disrespected. 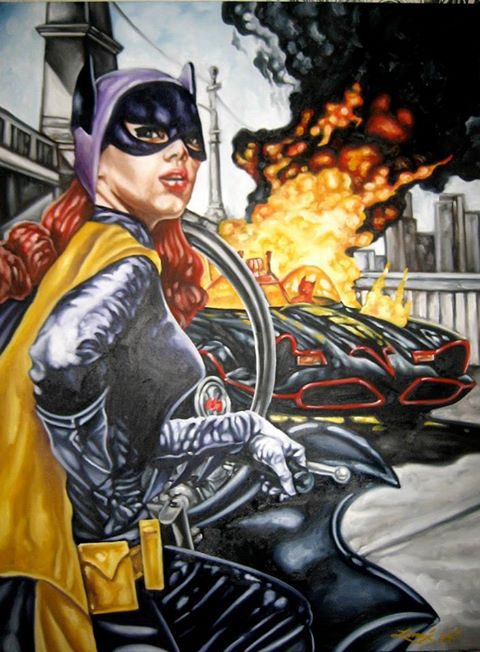 Malfunction would have to be my favorite piece of yours. Can you tell me what you were thinking when you painted it?
I love the whole Batman ‘66 series. I thought it was funny and bizarre. Batgirl was a big deal at the time and so was Eartha Kitt as Catwoman, especially with the Civil Rights Movement. I really liked all of the colors and camera angles. I took those images and thought “I’m going to fuck with it. I’m going to flip the script a little bit and place Batgirl in the foreground so she’s running the shit. Batman is in the Batmobile, and it’s on fire.” I just wanted to see what would happen. It’s not so much, “Let’s set Batman on fire.” It’s more like, “Let’s fuck with the perspective and give it a controlled chaos and go from there.” Batgirl is like, “I got this, I got this.”

You mentioned Eartha Kitt and the Civil Rights Movement. Do you draw inspiration from that as well?
I do. I did do a piece with James Garner from The Rockford Files. He was a big civil rights activist. I stumbled upon a photo of him in a civil rights march when I was back in L.A. I flipped it and featured a bridge in L.A. and another car on fire. There’s a series where I liked to put things on fire. Whatever’s going on in the painting, something has to be on fire. I’m still kind of into it. I’m on the tail end of it though. I never want it to take over. I want it to be an element.

You mentioned your mother and your sister. Was your dad around when you were growing up?
My dad was around, he was a very good man. We came from a very low-income neighborhood. I just remember living in a duplex in a fucked up area. But my dad worked his ass off and became a structural engineer, and he just worked and worked and worked. I respect my dad; he’s a fucking champ for that. He was completely selfless, but I think he was selfless to a fault. I love him to death, but he and his father worked themselves to fucking death. As I got older I got mad at him for not living his life. He was an awesome musician. He’s the best guitar player I have ever seen. He could play anything. 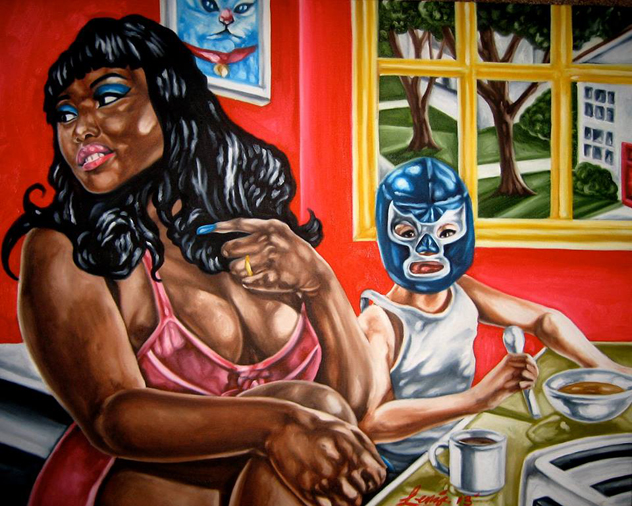 How has music inspired your art?
I was raised on punk. I grew up in a goddamn mosh pit. I grew up in the punk scene in the ‘80s, and that scene here in Sacramento was fucked up, terribly fucked up. The skinheads fucked everything up. I went to my first show when I was 16. I got my license, I had a car, a station wagon. I remember I was so excited that I was going to see Social Distortion at the Cattle Club. It was the most violent fucking show on the planet. I have never seen a show since then that has been that violent. Before I even got into the show I watched skinheads get their heads smashed in by security guards swinging billy clubs. 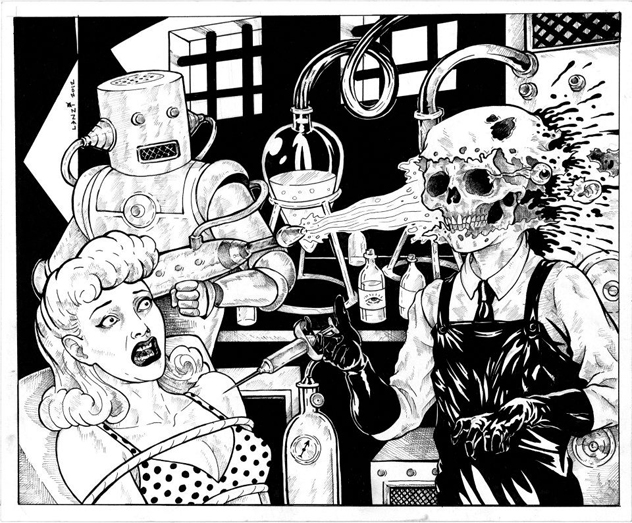 Have you ever thought about making a graphic novel?
Absolutely! I’ve tried a couple of times but I’m a horrible writer.

Something you’re not horrible at is cooking. Is it true that you cooked food at your last show?
I love cooking! Yeah, I cooked all of the food that was at the show on Second Saturday! When I’m cooking for other people, I want to fucking blow it up! I want things to be nice and taste good. For my last show I brought a big thing of water because I knew it was going to be hot. I filled it up with cucumbers and mint from my garden in Courtland. Everybody loved it!

You mentioned your garden in Courtland. Can you talk about your journey from Sacramento to L.A. and back to Northern California?
A very close friend of mine saw what I was doing and said, “What the fuck are you doing up here? You need to get your ass to L.A.!” So I packed up my truck and left. I did a show with Homeboy Industries only two weeks after I moved there. I hit the ground fucking running. It was bonkers. The assistant director of The Simpsons was there and he actually did buy one of my paintings that night for his office. It was like one of the greatest things ever. 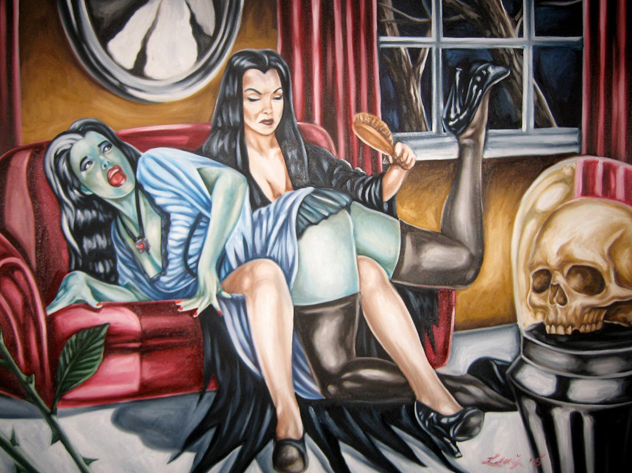 Why did you move back to Northern California?
Sacramento is a boomerang. One of the reasons I moved back is because my family is here. I didn’t have any friends down there. Sure, I could sell paintings, but I didn’t have any friends. And I was sick to death of Hollywood. I was finally like, “Dude this place is fucked up.” I wasn’t happy, and when you’re not happy with something what are you going to do? You’re going to change it. So I’ve been living in Courtland since March.

How do you see your art changing now that you are back in Northern California?
I think I’m just going to do a lot of rural stuff. I mean, living out in a rural community … I have to deal with coyotes. I’m going to keep my perspective though. The lens will be the same, it’s just the target that will be different. Instead of walking out of my place in North Hollywood and seeing five guys zip tied together I have to deal with coyotes trying to get my chickens. 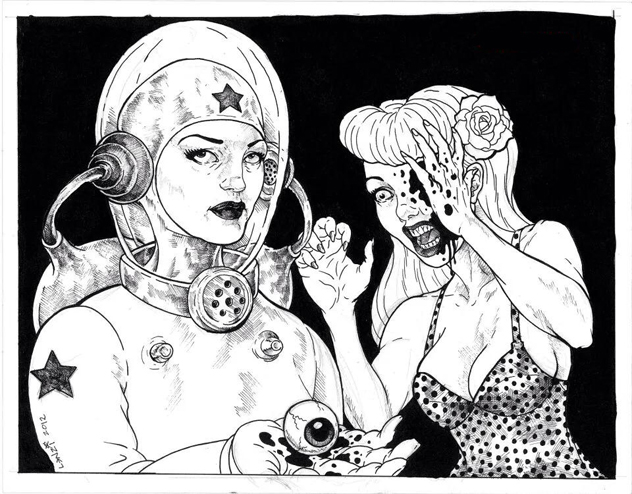 To learn more about Lenzi, go to Facebook.com/chadlenziart.