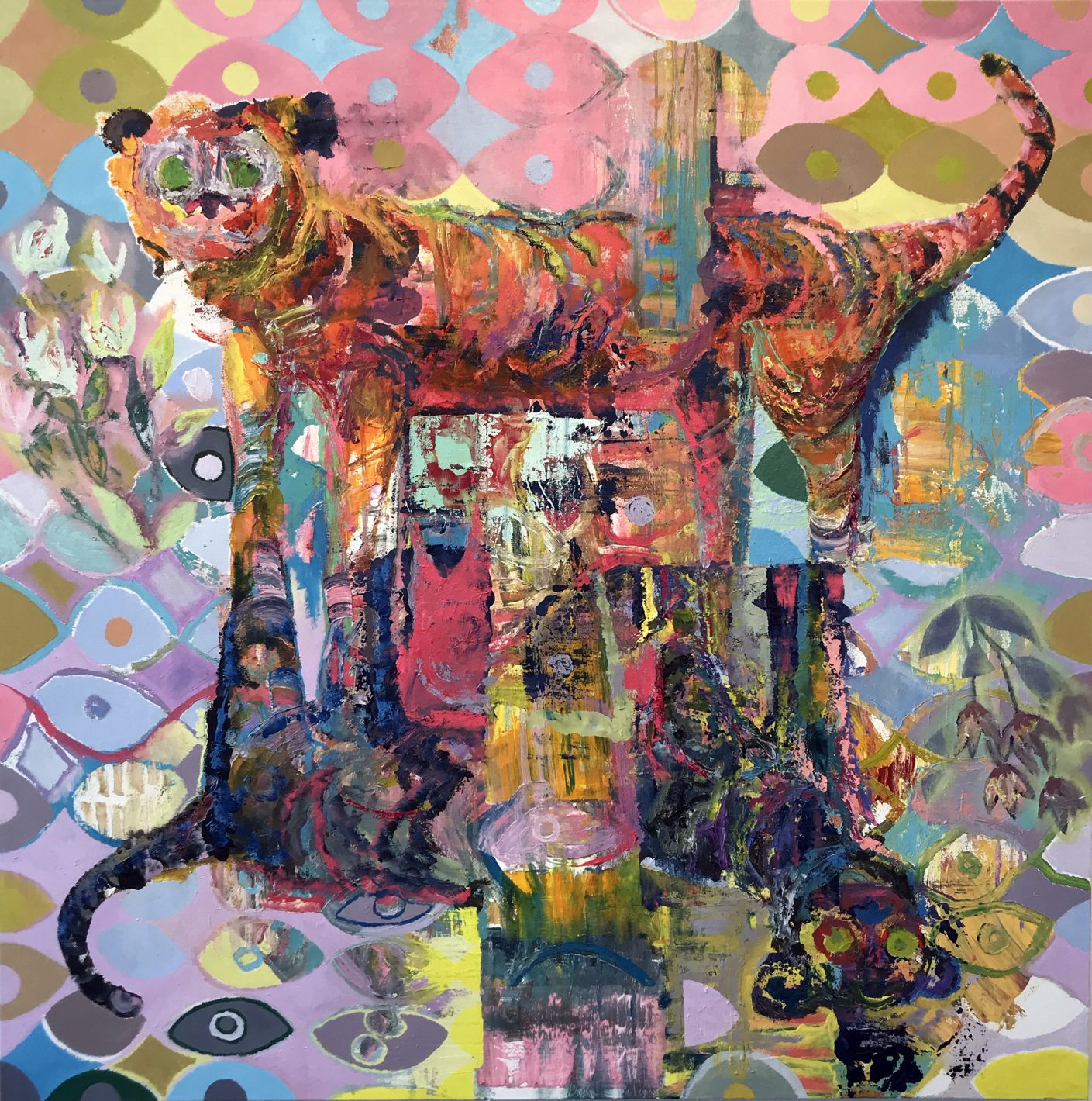 The mystique of the artistic process is a trope that has permeated just about every discipline that comprises the visual art world. We’re all eager to know “what” that piece means or “why” that artist used those specific brushstrokes to create that particular form. But the mere act of creative expression—producing something from nothing—is significant.

To glean insight on the creative process, talk to any artist and you’ll get a different response on what that even means. Some say it’s about discipline, others lean into collaboration, and then there are those brave souls who operate within the plane of the subconscious mind where plans go straight out the window, yet beauty still emerges.

For Sacramento artist Jeff Mayry, the progression of the pieces he creates, much like the exploration of the patterns of the human psyche, is dominated by the absence of a conscious process. Rather than relying on a premeditated road map, Mayry employs repetition, collection and chance to pilot him. This spontaneity results in artwork that conveys emotion rather than logic.

“My aesthetic kind of changes,” Mayry explains. “It fluctuates in between abstract and figurative, but I don’t have a set process or anything. I start my paintings with what I call an inner logic, which is kind of like an internal logic, but something that only makes sense to me.”

This is perhaps why Mayry’s work—currently on view at JayJay Gallery during its three-person exhibition, titled Hot Fun—is the perfect addition to the show given its theme. As the gallery’s curator and a participant in the show, Mayry was careful to select artists whose work fully embraced the intent to move the viewer through different states of pleasure by employing color and narrative elements as driving forces. Kristin Hough, a Los Angeles-based painter, and David Mohr of Oakland round out the exhibition’s triumvirate. 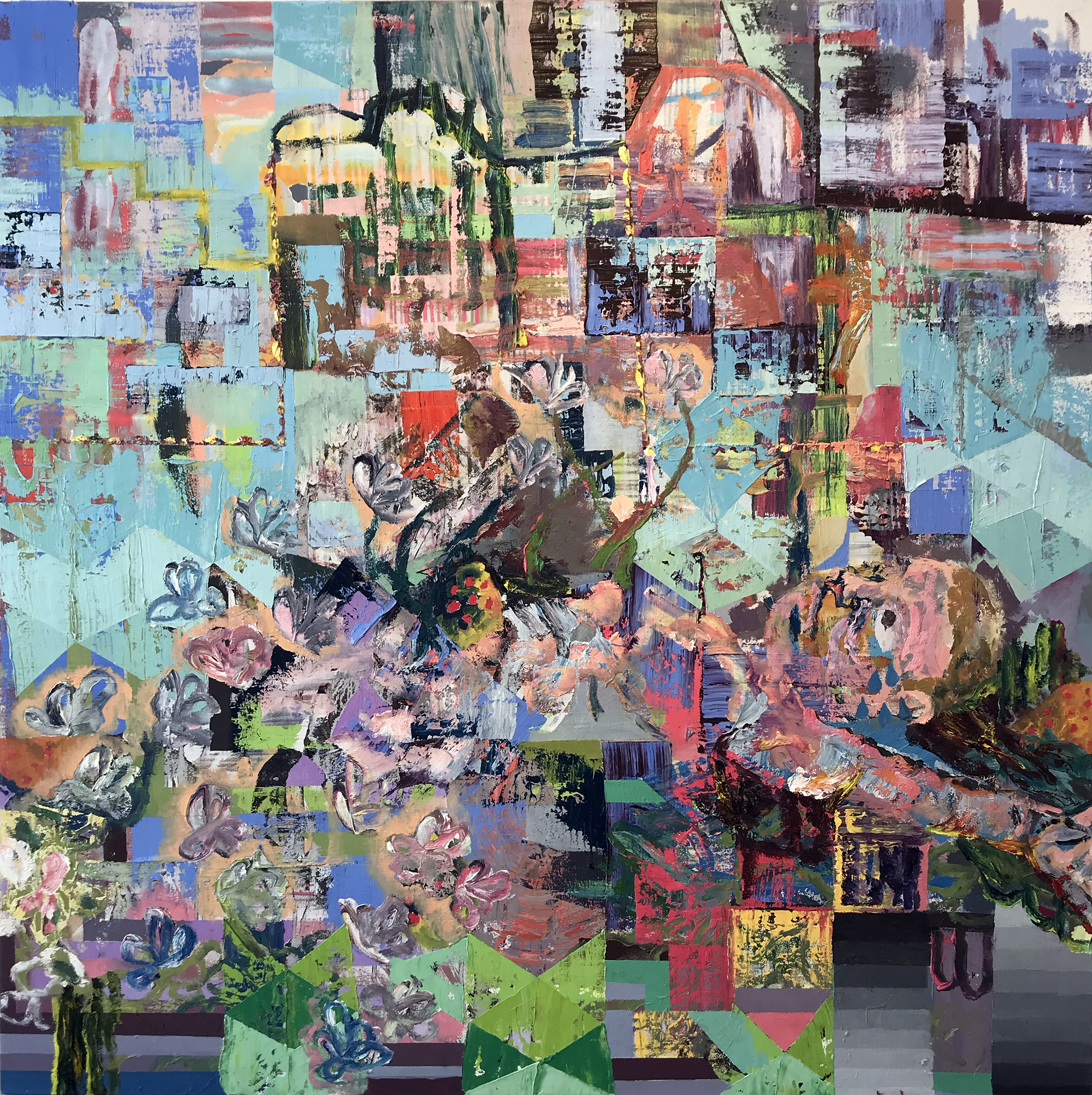 “We were trying to pick artists that expressed, either abstractly or figuratively, moments of pleasure through color,” Mayry explains as he walks through the pieces in advance of the show. “So, this is David Mohr, we picked him because of his palette—it expresses pleasure, but also when he talks about his paintings, he talks about them as impermanent, like they’re moments in flux.”

During a recent tour of the gallery space as Mayry was hanging the show, the juxtaposition of texture, energy and flow that pours from his work culminates in a flurry of geometric and organic forms that coalesce to create artistic offerings bursting with energy and movement. In Mayry’s work, texture and the energy elicited in each brushstroke produce a sort of playfulness, but not in a childlike manner.

“My process isn’t like one where I sit down [and paint]; it’s more of a physical process,” he says. “And then, [with] paint, I guess over time I became just more interested in the physicality of it. You can load up a brush with a ton of different colors or using tools like chunks of wood to scrape down or like different ways of applying paint, so then the texture obviously happens, but it also provides an outlet for different things to happen with the colors, too.” 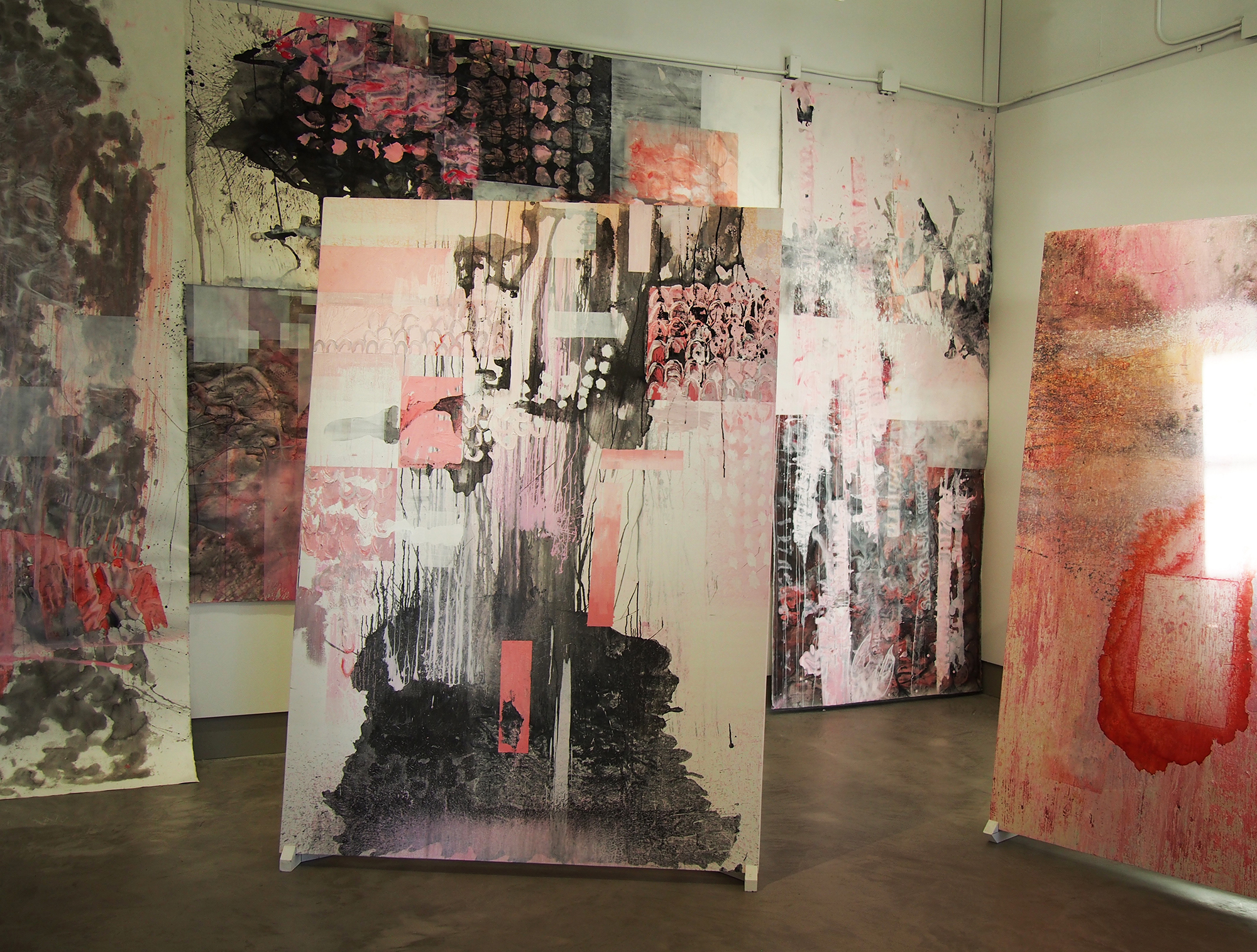 For those interested in how this process, or lack thereof, manifests itself in the canvases he creates, Mayry explains that his work is the result of what he says many would view as a nonsensical and repetitive act that ultimately leads to substance and content. And while the work he produces is unplanned, it’s not accidental, but rather a true expression of his subconscious.

One of the pieces in the show, Shadow Self Tiger, fully encapsulates this notion. The canvas bursts to life through a combination of techniques that build movement and perspective. The tiger’s stripes form through rivers of thick layers of paint that are evocative of the canyons and valleys you might find in the artists’ hometown in the foothills of Northern California.

“Compositionally, it’s set up that there’s a tiger on top of its shadow, but in reverse on the bottom, so it kind of creates this sort of hypnotic composition,” Mayry says of the piece. “I gravitate toward using tons of colors, almost in an obsessive way to where I’m using too many, so it’s almost like reconciling with the image with the amount of colors that I want to use.”

The reflective theme of Shadow Self Tiger continues with the backdrop on which the tiger and its echo lay—the canvas teems with shapes that are reminiscent of the all-seeing eye, or eye of the tiger, that lures the viewer into its snare. 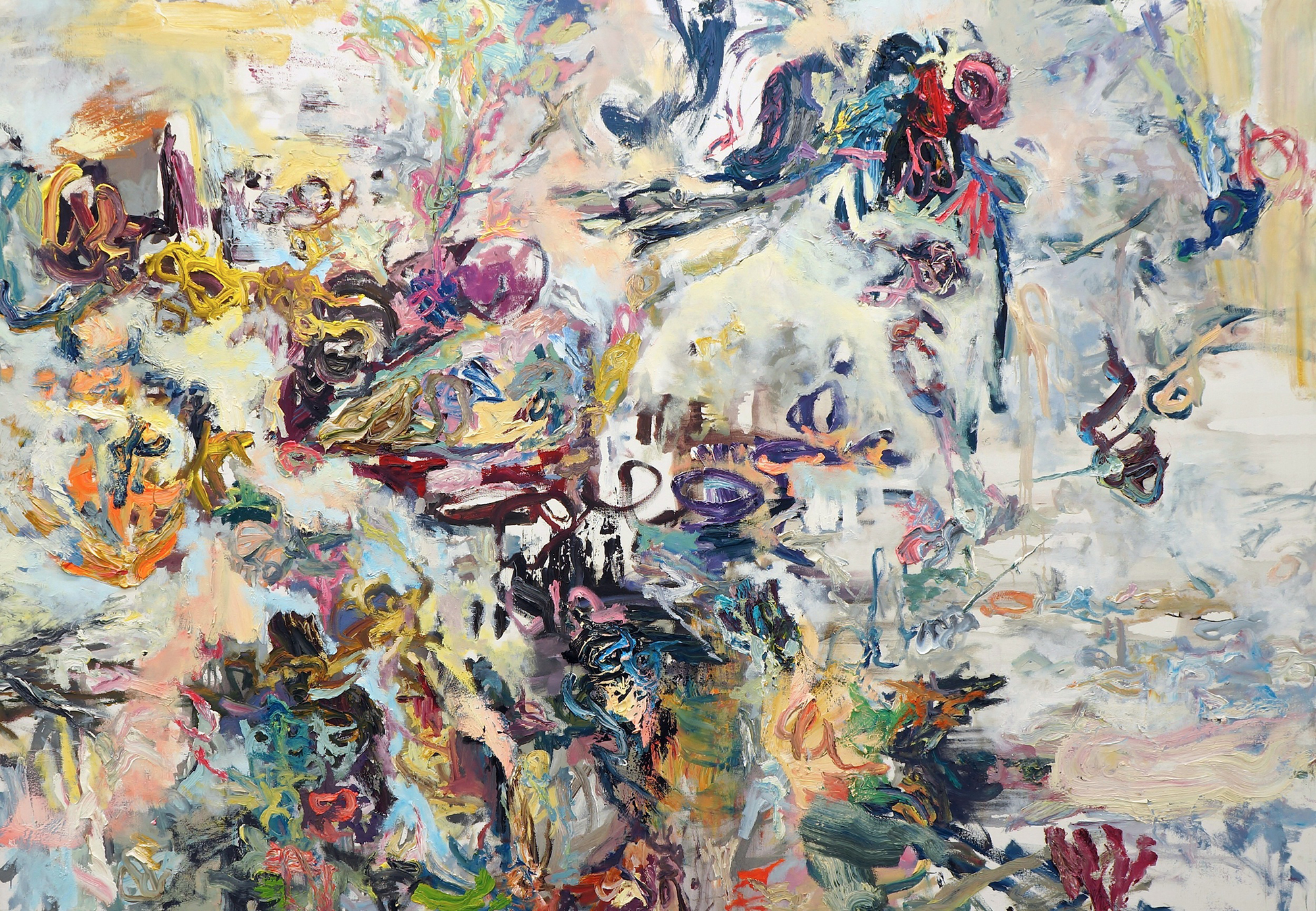 “I don’t use color straight from the tubes, so everything’s mixed—I mix one color then I can endlessly change with the others, and I just keep going,” he explains. “To that extent, I kind of have ADD about it—I just keep going until I have to reel myself in at some point because it does have to actually make sense to someone other than me.”

Mayry does not shy away from allowing contradictions to emerge within his work—the energy that emerges in his visual prose is born out of a construct that combines drawing, painting and sculpture. For the artist who admittedly toggles between the realms of the figurative and the abstract, there are moments where pure form emerges within the expanse of what initially appears to be uncontrolled chaos to the naked eye.

“The process is extremely up and down with how I feel about it—I might feel like it’s good one day, then I change it [the next day],” he admits. “I’m constantly going back and forth, so it’s more like getting to a place where I’m comfortable with it.”

Mayry admits that while he is driven to express himself through the mode of color and texture—he says that he is drawn toward colors that are pure and true—he asserts that it’s the very nature of color to convey the beauty that operates in the visual world as well as the emotional. To Mayry, color has the power to communicate what it truly means to be alive. 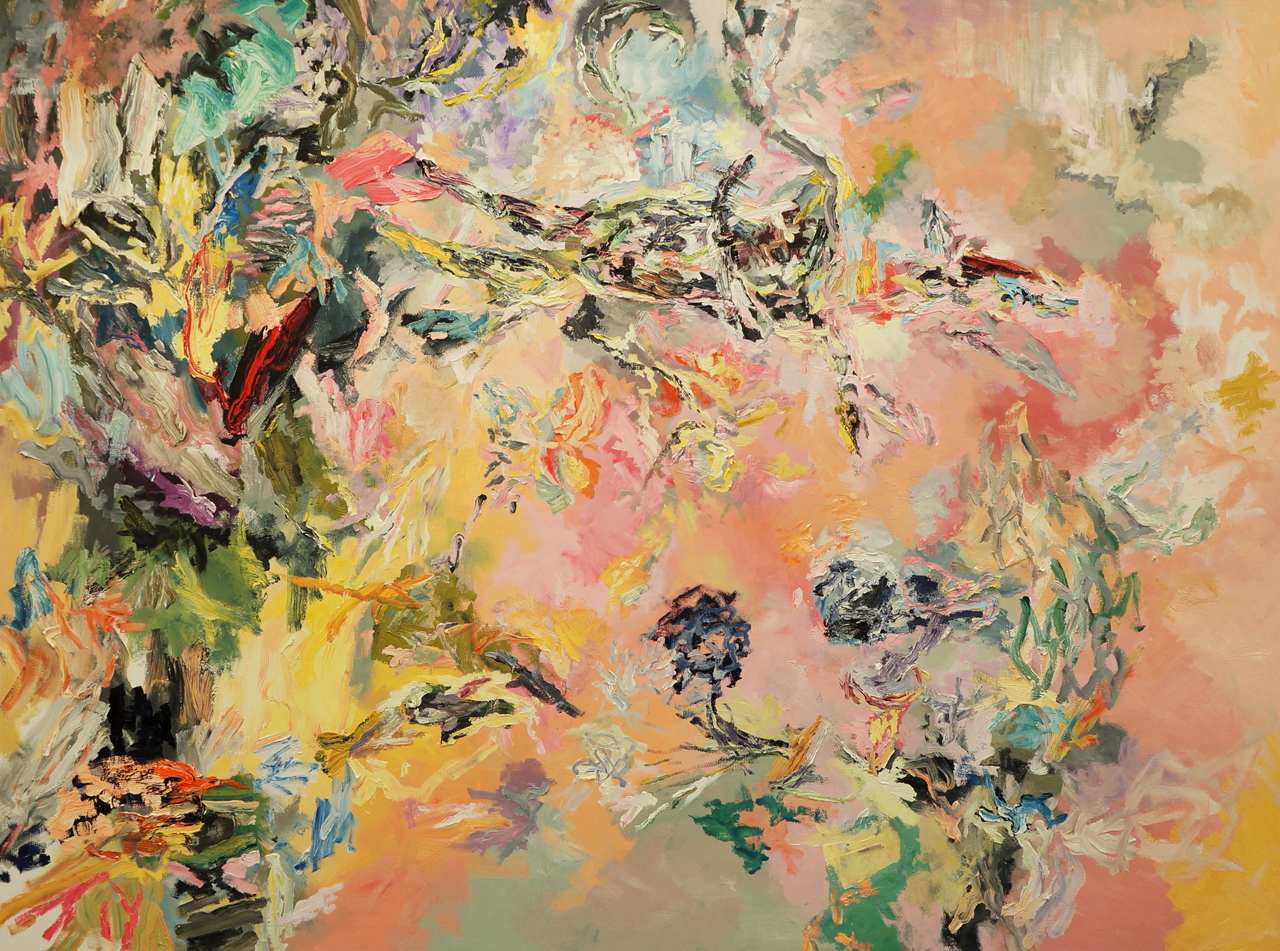 For an artist who is constantly exploring and pushing his artistic limits, Mayry says he learned to reject the notion of perfection and to simply allow what is inside of him to pour out onto the canvas—much like the thick, viscous rivers of color that lend form to the abstractions within his work. With an almost frenetic sense of urgency, Mayry continues to explore the nuances of his creative spirit animal.

“Looking back, art has really been it for me,” he beams. “Interests come and go, but the act of making things has been my constant, and I will never leave it.”
Even in abstraction, elements of the style and character of the artist’s deep inner self emerges and communicates his place and intent in the world. Deeper yet is the unconscious mind—and oh, what a beautiful mind Mayry has.

Check out Hot Fun, featuring Jeff Mayry’s vibrant, abstract art, at JayJay Gallery (5524 B Elvas Ave.). The show runs through Aug. 10, 2019. Admission is free and you can visit Jayjayart.com for more info.