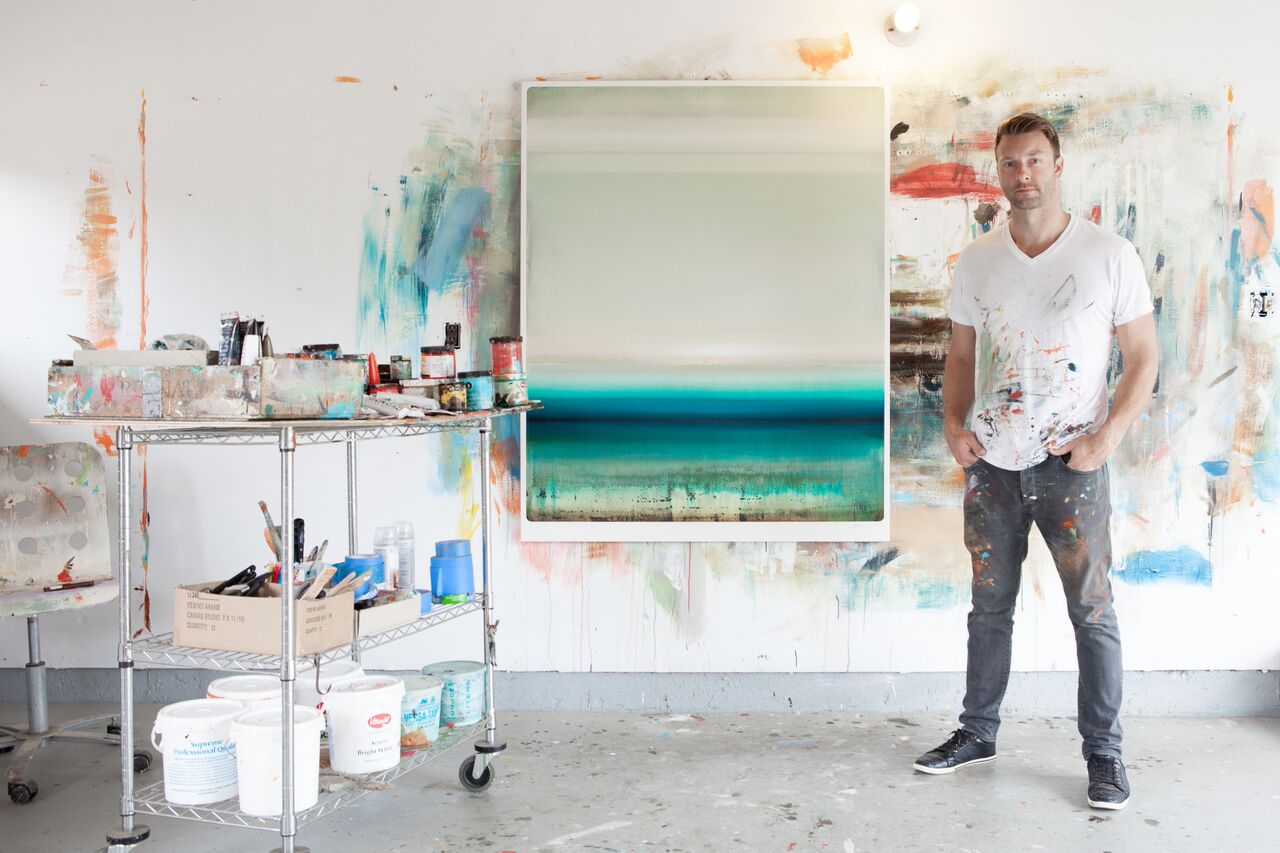 Micah Crandall-Bear’s latest body of work is a lot like the artist himself—a combination of precision and a minimalistic sensibility that draws heavily from a deep appreciation of natural beauty.

For those unfamiliar with Crandall-Bear’s artistic vision, the painter operates in the world of the abstract. His canvases are heavily layered acrylic landscapes of bold striations of colors focused on hard line compositions that explore the many nuances of something we see every day: the horizon. His technique is methodical and precise, implementing a traditional method that is typically associated with oil painting wherein swiftness is essential. Layers of wet paint are applied to previous layers of wet paint in linear brushstrokes that traverse the entire length of the canvas from left to right.

His latest body of work, titled Latitudes and is currently on display at Elliott Fouts Gallery through July 2, eschews cityscapes, but instead celebrates the refinement of nature.

“This show, instead of trying to be complex … is actually a bit more subtle,” Crandall-Bear explains. “It’s also more refined. There used to be a lot of exaggerated line and color, where in these paintings it’s got a little bit more of a desaturated feel. So it’s softer, more subtle.” 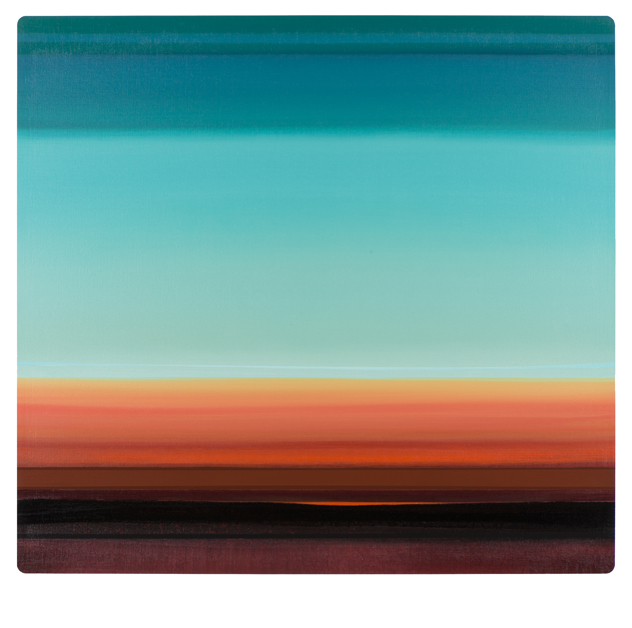 The artist recently invited Submerge into his airy studio to explain this latest collection of work and how an early experience at the Michael Himovitz Gallery on Del Paso Boulevard under the mentorship of then-gallery owner Chuck Miller led to the progression of his singular vision and ultimately into a successful career as an artist.

“I started interning there in ’98 or ’99, so toward [Michael Himovitz Gallery’s] later years. Michael had died already, but his partner Chuck Miller was running the gallery,” he explains. “I ended up mentoring under Chuck. He kind of took me under his wing, although he didn’t really care for my art, but over time he started selling my work and introduced me to designers like Paulette Trainor, you know, big figureheads in the community, so I was pretty fortunate. I was around that at a young age, which was great because I learned the gallery side before I learned how to be a career artist.”

And while the Himovitz gallery shuttered its doors in 2001 after a successful 20-year run, Miller and Crandall-Bear remained close, both personally and professionally, until the venerated mentor died in 2009. The lessons learned from that relationship still reverberate through Crandall-Bear’s experience as an artist—specifically one who still sees value in the gallery-artist collaboration, especially as many of his contemporaries look to other avenues for introducing their work to the world. 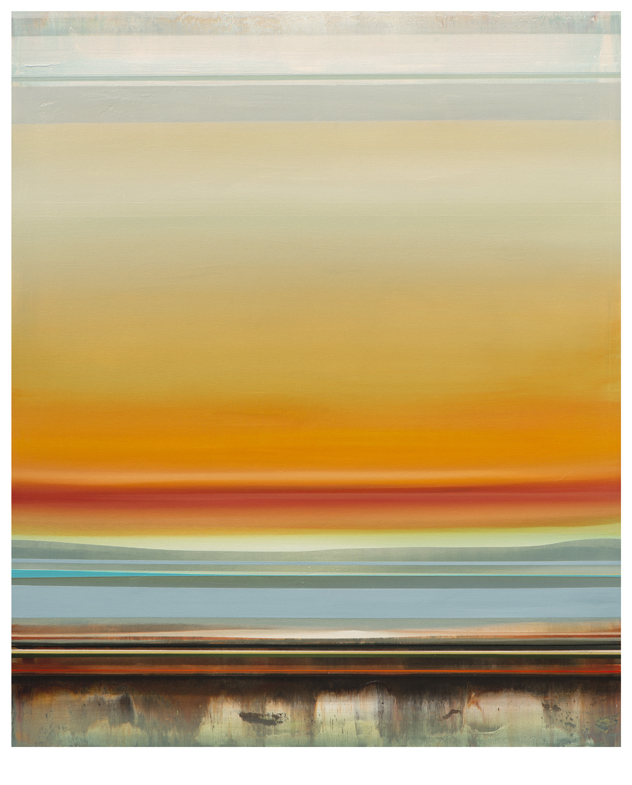 “Chuck and I continued to work together [doing] private art sales and design showcases. He basically just turned himself into a broker, an art dealer without the brick and mortar, but he sold art until he died,” he says. “So fast forward 10 to 15 years, there have been a lot of galleries that have come and gone, but the gallery world as far as representing artists is changing, especially with social media and Instagram. A lot of artists are using that platform, Instagram, as a sales platform, and they should: it works. There are a lot of artists in my community that don’t necessarily adhere to the gallery format like I do. As I said, I grew up doing that so it’s kind of what I always knew.”

Like most artists, Crandall-Bear’s work has been an exercise in evolution: from a series of figurative works with rigid urban tones, incorporating text, spray paint and elements of graffiti in the beginning, to the progression of a singular idea expressed through bold stripes and color fields.

Focusing on the work, Crandall-Bear’s art pieces have won him favor with art consultants, interior designers and corporations. And while his work adorns the walls of tech companies like Intel, skyscrapers in San Francisco, university hospitals, law firms, corporate and government offices and a slew of private residences, it’s the spirit of the local art community that has him really excited about Sacramento’s future as an emerging hub for creatives. 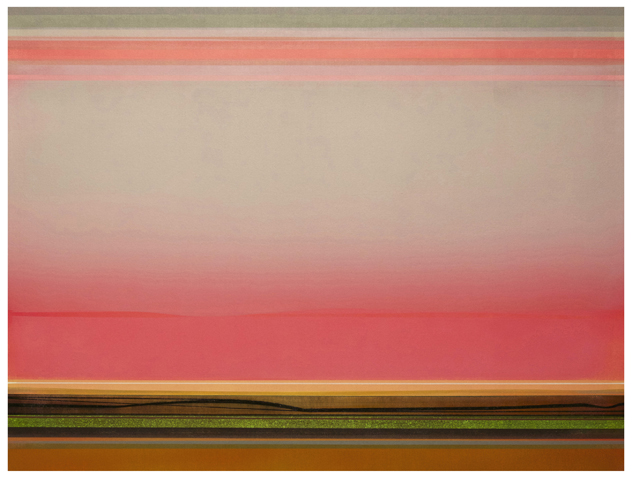 “It’s an exciting community and I think right now it’s probably, as far as visual art, it’s the most exciting time in Sacramento’s history,” he gushes. “Right now there’s so much going on in the art scene with things like the [Bright] Underbelly [mural] project, WAL, Verge, Elliott’s gallery, and you want to be a part of that. You can liken it to other places, their story has been written, like San Francisco and L.A.; ours hasn’t and that’s exciting.”

As one of the artists whose work has contributed to the transformation of the historic 100-year-old Lawrence Warehouse into the Warehouse Artists Loft, a lofty experiment in a mixed-use, mixed-income community for artists located in downtown Sacramento’s Historic R Street District, Crandall-Bear has begun to embrace the idea of collaboration among artists.

“I feel like I, like a lot of artists, used to be in my bubble and work alone and just kind of be hyper-focused on my immediate goals. It was very linear, and now with it being an exciting time with visual art, there are so many other artists that are doing extremely well because of the community here,” he explains. “So I found myself really wanting to do projects where I’m collaborating with other artists and we’re doing these big paintings for like a music festival or something else. So I’ve collaborated with a few really amazing artists from more graffiti street-style artists to hyper-modern artist, [like] Jose [Di Gregorio]. We’ve done a big piece together and the community is growing. The spectrum of artists is broadening and therefore there are more artists becoming even more successful, which is good for all artists.” 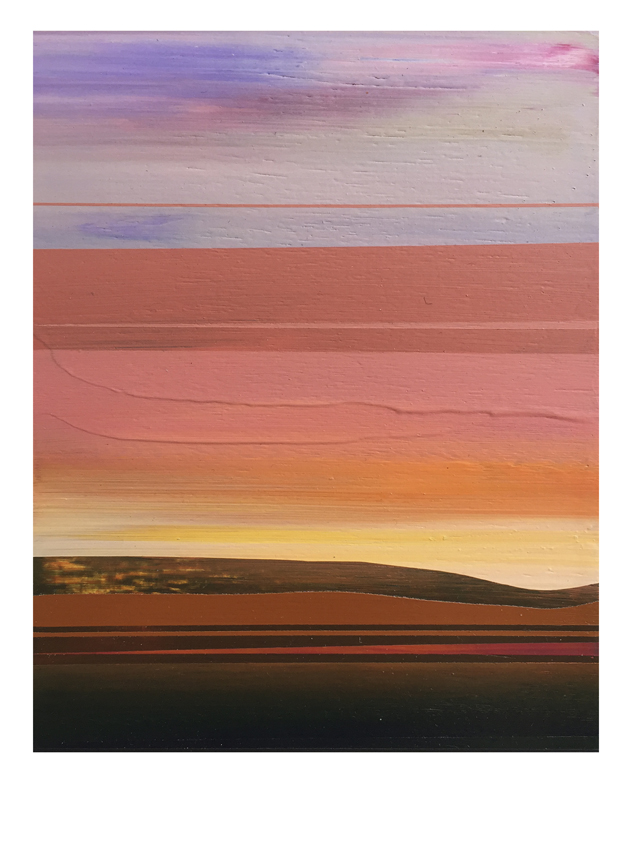 As his creative point of view continues to develop in tandem with his artistic maturity and ambition, his latest show is pushing the Sacramento art community to recognize and embrace the beauty that can be found within abstraction.

“The work is meant to give a feeling of exhale to the viewer,” he explains. “We’re constantly surrounded by a world made of man-made things so [this show is about] when you get back to nature; it’s why I started painting like this. I paint what I like to see or feel, and so these vast colorscapes lend themselves to my life.”

His bold, nonfigurative compositions are imbued with explosions of color that are able to convey passion and excitement while, at the same time, evoking serenity and tranquility. And although this latest exhibition is instantly recognizable as a Crandall-Bear show, the artist says that he is taking his signature theme and breathing new life into the canvas.

“These pieces are still heavily layered and detailed, yet a sense of calm can be found as variations in dense tones give way to luminous neutrals,” he says.

Check out Latitudes which runs now through July 2, 2015, at Elliott Fouts Gallery, located at 1831 P Street in Sacramento. A reception for the show will be held on Saturday, June 13, from 6 to 9 p.m. For gallery hours, go to Efgallery.com. If you’d like to learn more about Micah Crandall-Bear and peruse his artwork before you go see it in person, go to Micahcrandallbear.com. 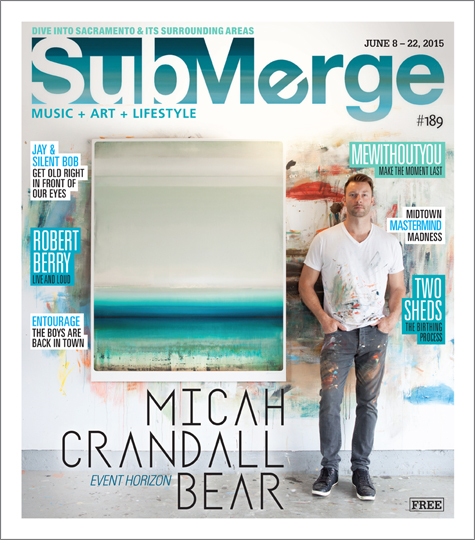