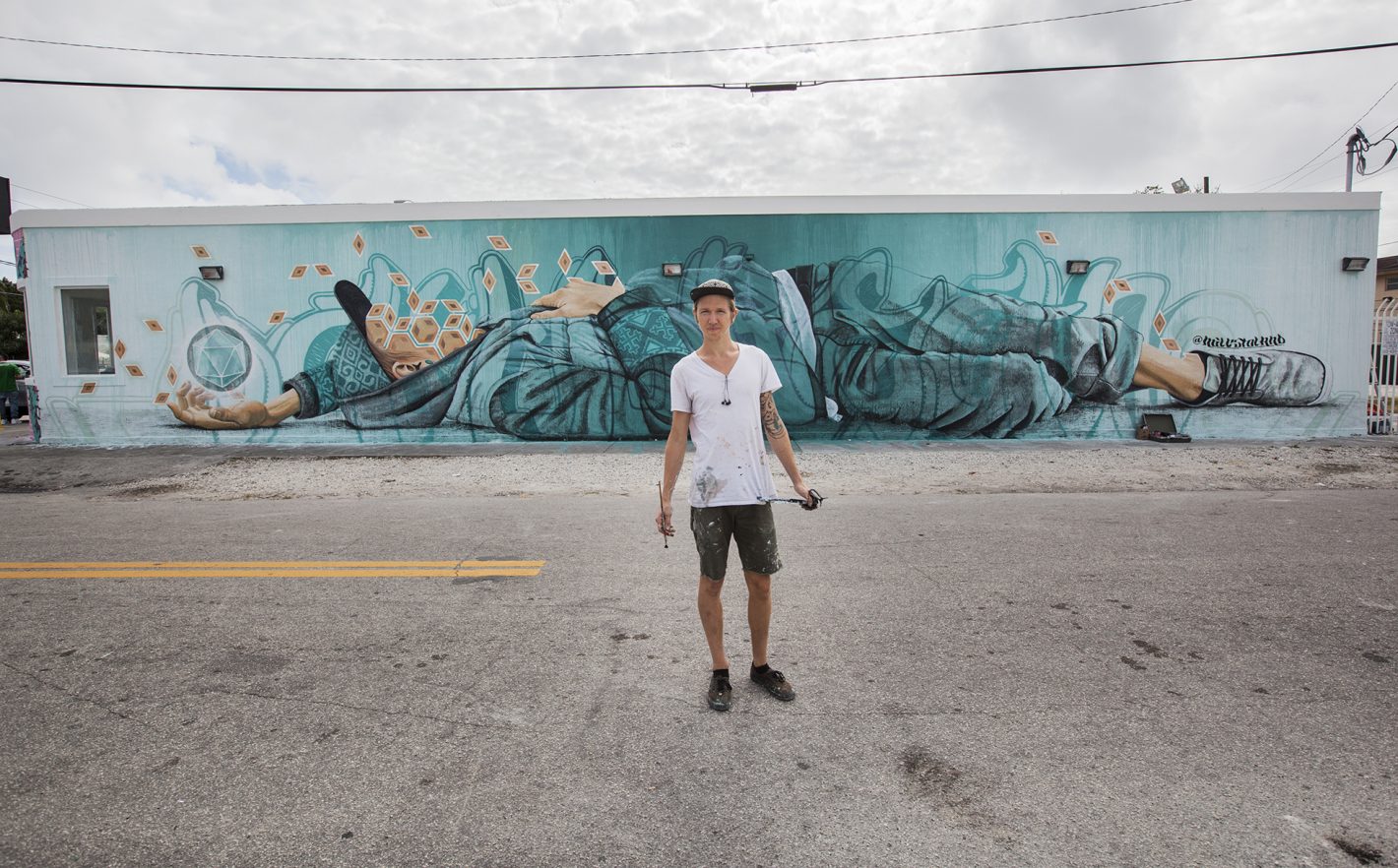 If you caught a minivan pulling up to the Warehouse Artist Lofts on Thursday and thought, “Who is this earthy motherfucker?” there is a strong chance it was Miles Toland. Especially if it was between 3:30 and 4 p.m., because that’s when I was standing outside thinking that.

The New Mexico native has re-situated himself in Grass Valley and has quickly caught traction within the local arts community. His current show, Dreamer, opened July 7, 2017, at 1810 Gallery. He is also participating in the Wide Open Walls mural festival in August, alongside some interesting picks like Micah Crandall-Bear, and one of Sacramento’s most-sought-after muralists, Jose Di Gregorio.

Toland’s previous shows and extensive traveling throughout India have helped him become a versatile artist. His work translates fluidly from canvas to bare concrete walls alongside street food vendors.

His work in Dreamer fills each frame with billows of vapor that writhe through and around human forms. Patterns and elemental shapes morph into human forms, quickly allowing the viewer to get lost in a space between the physical world and an ethereal plane.

All of these pieces utilize some letter structures inspired by Toland’s engagement in graffiti as an adolescent growing up in Santa Fe. Bold letter strokes in a style born both out of hand-styles and Sanskrit writing collide with a soft, dusty palette of colors and patterns.

This collision allows the viewer to wander around in the different opacities, before landing on saturated, fine line-work. The faces seem to evaporate like Marty McFly in Back to the Future, while motifs and geometric patterning re-emerge into the void.

After walking around asking strangers in the parking lot if they were Miles Toland, I took a peek into the 1810 Gallery before we lined up some shots and beers and talked about his art, dreaming and hallucinogens for a while.

(Another note: He literally sold a piece as we were sitting at the bar. Like, it wasn’t even done or open yet, it was only on the wall for the 30 minutes we had been talking, and he sold one. It was awesome.) 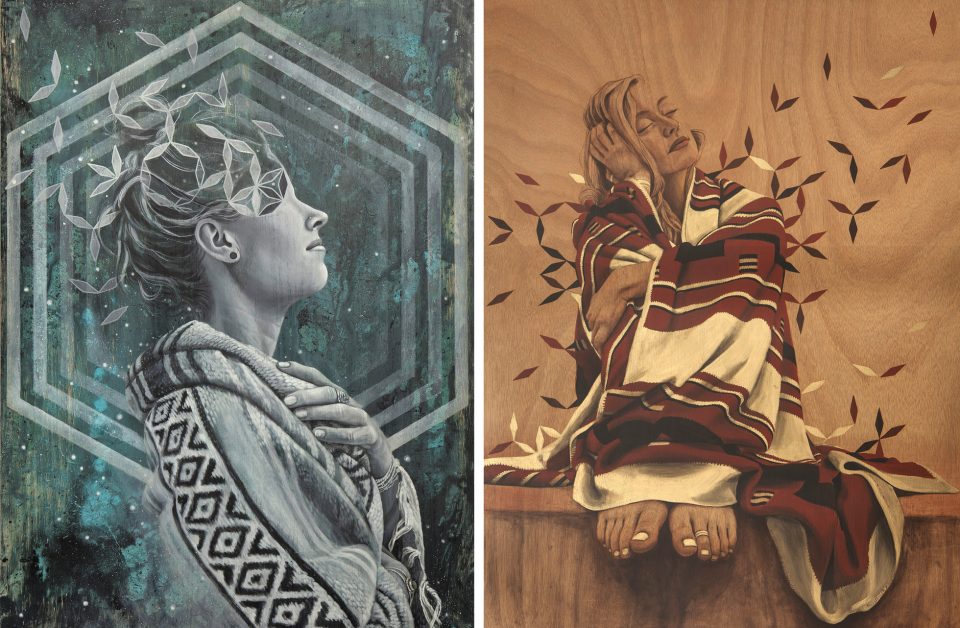 So where has graffiti played into where you are or your style in general?
Well, my introduction to art really started through graffiti in Santa Fe, New Mexico, when I was a teenager. So it was all about letter structure, form and flow, how different parts of the letter fit together with the other. So the letterforms and the typeface I use in Dreamer kind of derived from that origin, but mixed with the Asian influence of Sanskrit, and also the cholo, calligraffiti style of the West Coast.

Who were some of your local influences in that area?
My biggest connection was to the TNR crew, a couple of those writers took me under their wing and showed me a lot of techniques and tactics to use in graffiti. Perish, Furious and Hick were the most influential letter styles for me. They kind of have a diverse range among those three people.

How has graffiti influenced the way you approach art in general?
I’d say that graffiti has kept me humble and more in it for the sake of art. I, like, definitely have a foot in the fine art world, and the street art world, and the festival world. The street art world has kept me a little more down to do something for the sake of doing it, and not necessarily making a profit. Finding a really cool wall or abandoned space that seems like it could benefit from my own artistic input. It’s kept me more lighthearted and humble. 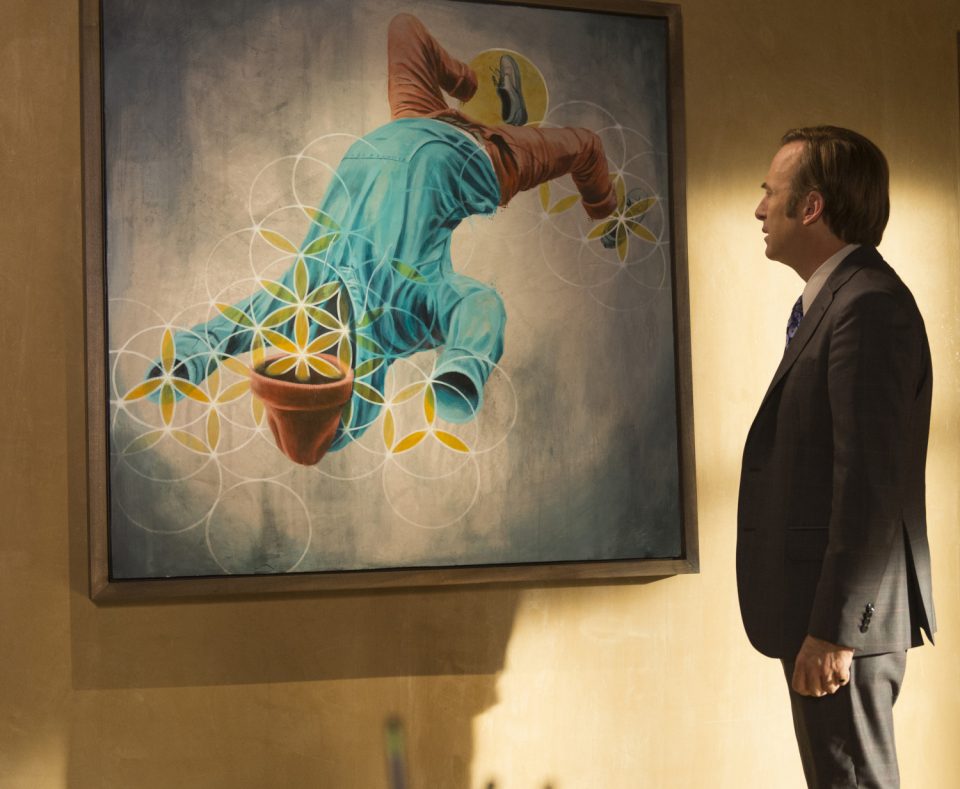 So how did the Better Call Saul thing come about? It’s just such a random thing to catch in an episode and wonder where that piece comes from or the process involved in getting art as part of setting the scene in a pivotal point in the season.
My friend was connected to the interior designing on Better Call Saul, and she gave them my contact.

It’s open to interpretation, but I think in the context of the show, it was someone slipping. In the context that it was originally painted, which was in India, it was someone in this geometric abduction, whose body was dissolving into this harmonic, geometric grid, and it was more like playing with this idea of, are they falling or floating, or exploding or imploding, and kind of creating this state of euphoria and transcendence where you forget who you are and your identity, and you dissolve into this different substance.

Are there moments that you have found through using psychedelics that have brought transcendental moments, and does that influence your art?
Totally. Yeah and I like finding it through the avenue of hallucinogens and breath-work and meditations. I think there are so many facets to dreamlife, which is what this show is about, it’s called Dreamer, and it’s about accessing the pineal gland, and dissolving into different dreamscapes. I think that there are a lot of parallels where you forget who you are, and you go into these psychedelic realms.

Were you out in India partly to see the Beatles’ ashram or did that opportunity materialize on your trip?
I started going around in India, and painting at different places, and ended up meeting a couple, that invited me out to paint the Beatles’ ashram.

They had been painting there for a number of years, and they invited me to come out there and paint it. That was a huge milestone to me, because we had as much time as we wanted to create. They had given permission to me to paint what I wanted. 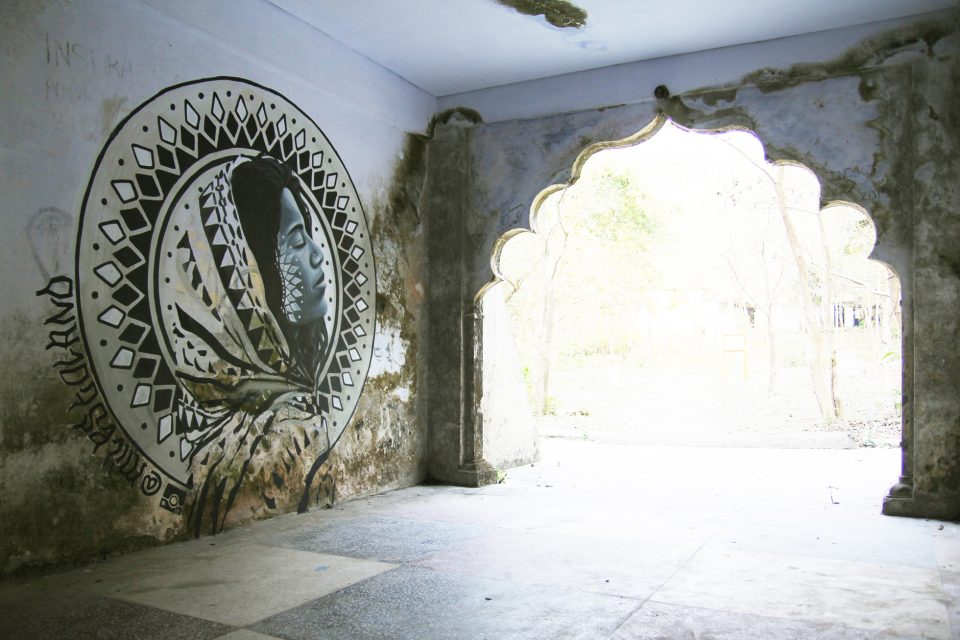 Where do you feel like you are going from right here?
I have short-term projects that are keeping my trajectory pretty focused. But beyond half a year, I am pretty open.

What about your van, how much longer do you expect that to last?
[Laughs] I’m terrified of how long my van is going to last me, because I’m so attached to it. This van has been my home away from home. I just did a three-week-long road trip across the Southwest with my girlfriend. It’s big enough that it can hold all my art stuff and my girlfriend’s stuff and then still comfortably sleep in there. I’m hoping it will last as long as I need it to, but it’s got over 200,000 miles on it. I keep having nightmares that I’m fixing my car.

Do you ever have nightmares about your teeth falling out?
Yes. Actually, I’ve had dreams the opposite, where my two front teeth are growing exponentially fast. 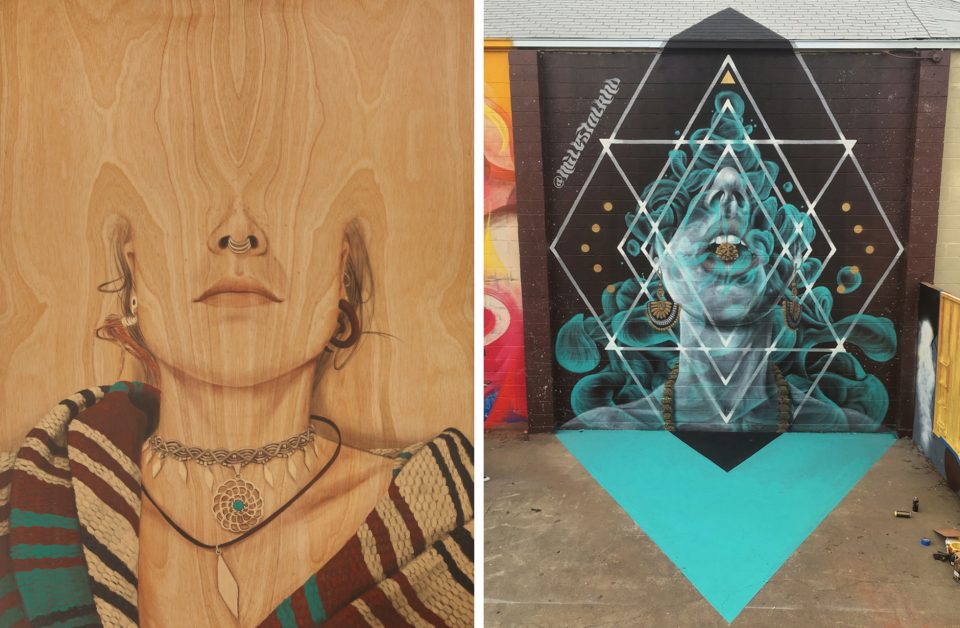