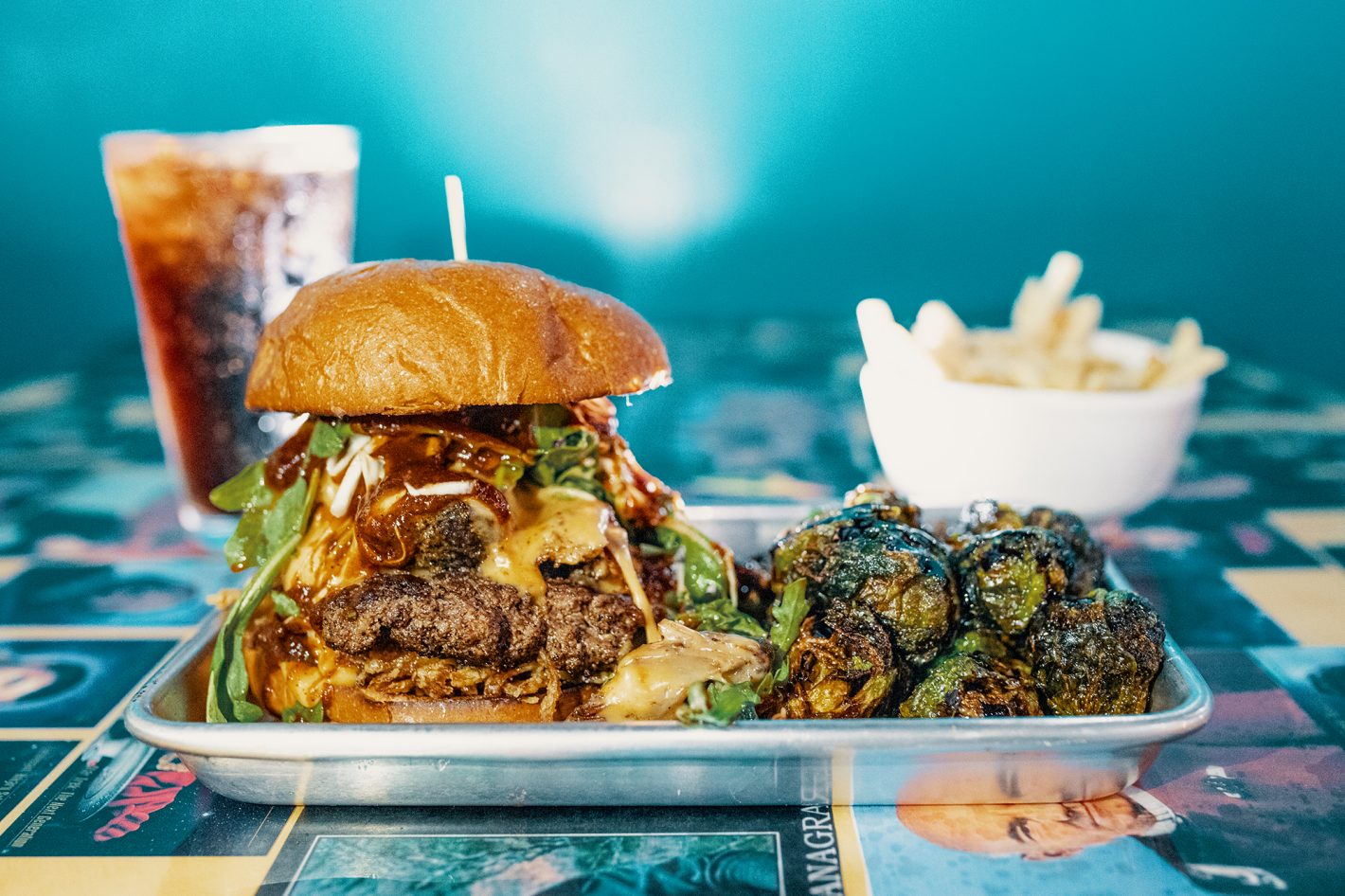 In less than 24 hours, I’ve eaten what may be the best hamburger and best pancakes I’ve ever had. I’m out of shape and should be on a diet, but when your editor asks you to write a review of a restaurant, and you forget about your deadline until the day it’s due, you have got to make some sacrifices. If you’re gonna cheat on your diet, you might as well cheat hard. So when I had the chance to gorge on the delights of the recently opened restaurant by Sacramento’s celebrity Chef Keith Breedlove, how could I say no?

Culinerdy, the long-famous food truck that you’ve seen at events throughout Sacramento for years, has opened a brick and mortar location, Culinerdy Kitchen at 524 12th St. It’s nothing short of wonderful. I strolled in about 10 minutes before their official 5 p.m. dinner service time and was greeted and sat at a table with no grief whatsoever from the servers. Located on the street of a main light rail line and not too much else of note, it’s a bit off the beaten path from the busier parts of the grid, but it’s a great spot that deserves to grow into a go-to breakfast, brunch and dinner spot. The pending alcohol permit on the front door suggests the evenings there will get even more amazing as time goes on.

“Nerdy Cuisine” may seem hard to understand, but don’t let that hang you up. The menu is full of some amazing breakfast, lunch and dinner options that are simply just reasonably priced, damn good comfort food with creative and gourmet ingredients that taste amazing. That’s not to say there isn’t a wonderful geeky flair throughout the place. The table I sat at was a remarkable collage of science fiction artwork, and I was given my dinner check inside of a Hardy Boys novel (The Tower Treasure, which is really one of Franklin W. Dixon’s most thrilling of the Hardy’s adventures). The best nerd rush I got, however, was seeing that the font on part of their dinner menu was clearly from the logo of the 1962 first issue of Marvel Comics’ Fantastic Four. Such daring to use the typeface of “The World’s Greatest Comic Magazine” to represent your food. It was a bold risk that turned out to be well deserved. 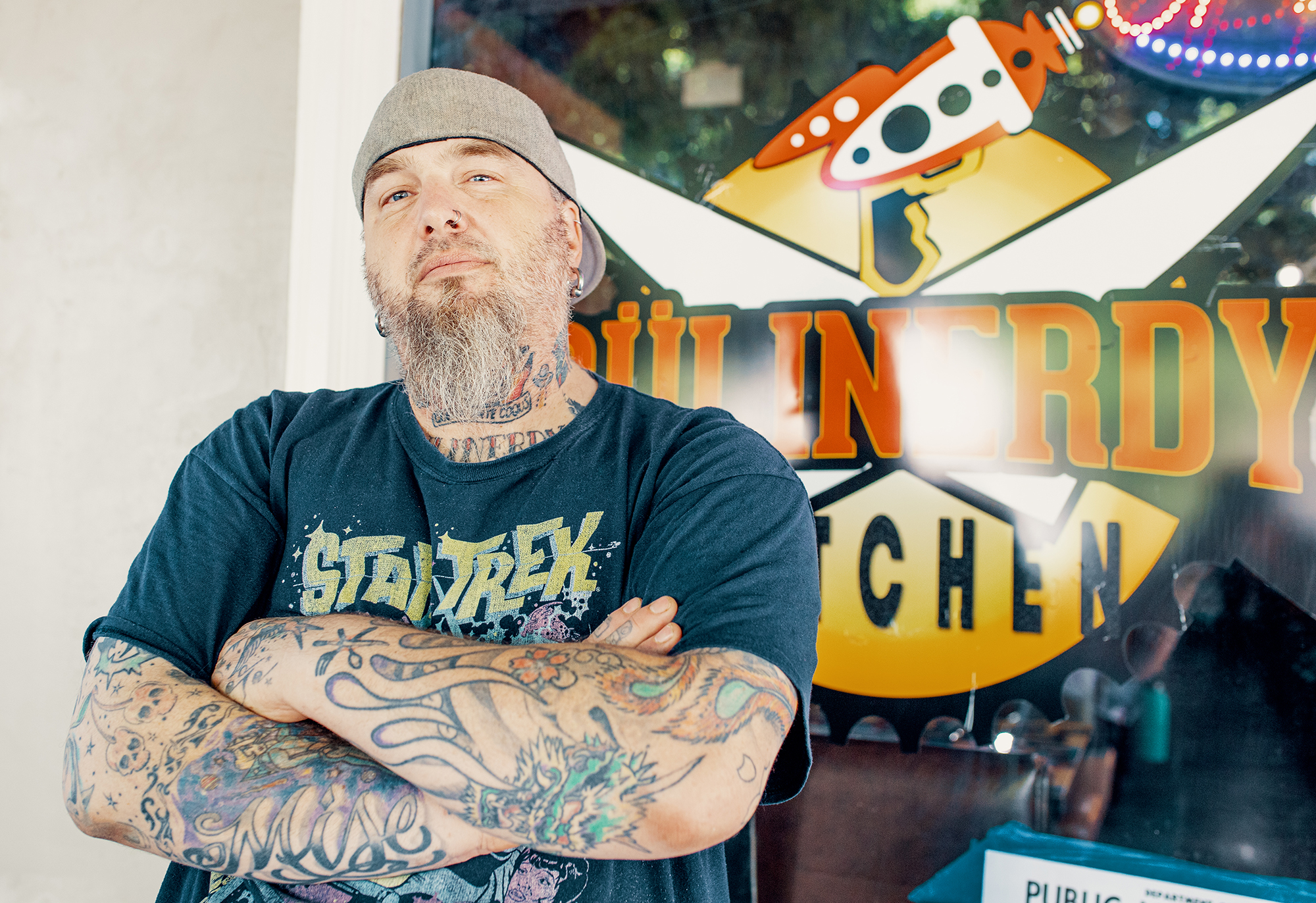 The dinner menu uses a Build-A-Bear type approach with your meal. You choose a base meal of a burger, mac and cheese, brussels sprouts or fries (any of which is available as a side, as well) and you choose between 15 different options to dress it up. From popular styles like Cubano and a variation of banh mi called “Banh Jovi,” there are more exotic choices like “Thai peanut and bacon,” which features bacon, peanut butter, sriracha and comeback sauce (which is an amazing combo of garlic, mayo and brown sugar), or “Californication,” which is a tongue-dazzling combination of chile verde, chorizo corn, cheese sauce, fried eggs and pork rinds! I chose the burger with a side of brussels sprouts option and was not disappointed.

The “Apple Bottom” burger is a work of art. Under the patty is a layer of bourbon-poached apples with bleu cheese that’s also been soaked in bourbon. The grilled onions, comeback sauce and “nerdy slaw” add up to a fantastic taste explosion the likes of which I haven’t been as excited about since I had a strawberry and bleu cheese burger 15 years ago. The beef patty was thick and flavorful. Usually, these loaded burgers are impossible to eat with your bare hands, but after cutting a few pieces off, I went for it, and it was totally fine. The bun didn’t get bogged down with moisture, and the toppings stayed inside as I gulped it down. The kitchen definitely built this with precision. The apples, cheese, onions and beef blended together in a harmonious choir of greasy bliss in my mouth. It was as if God himself was singing to me with each bite and I didn’t want it to end.

Make no mistake, this is hamburger perfection. My wife had a similar reaction with the “Earth and Brie” burger I brought her home (on a tasty gluten-free bun), which featured mushroom sauce and brie as the primary ingredients. She said, “Oh, God, this is good” three different times without prompting. That it held up so well after sitting on the table for about 20 minutes before she ate it bodes well for folks who want to order through Door Dash or Grub Hub, both of which Culinerdy Kitchen proudly uses for delivery. 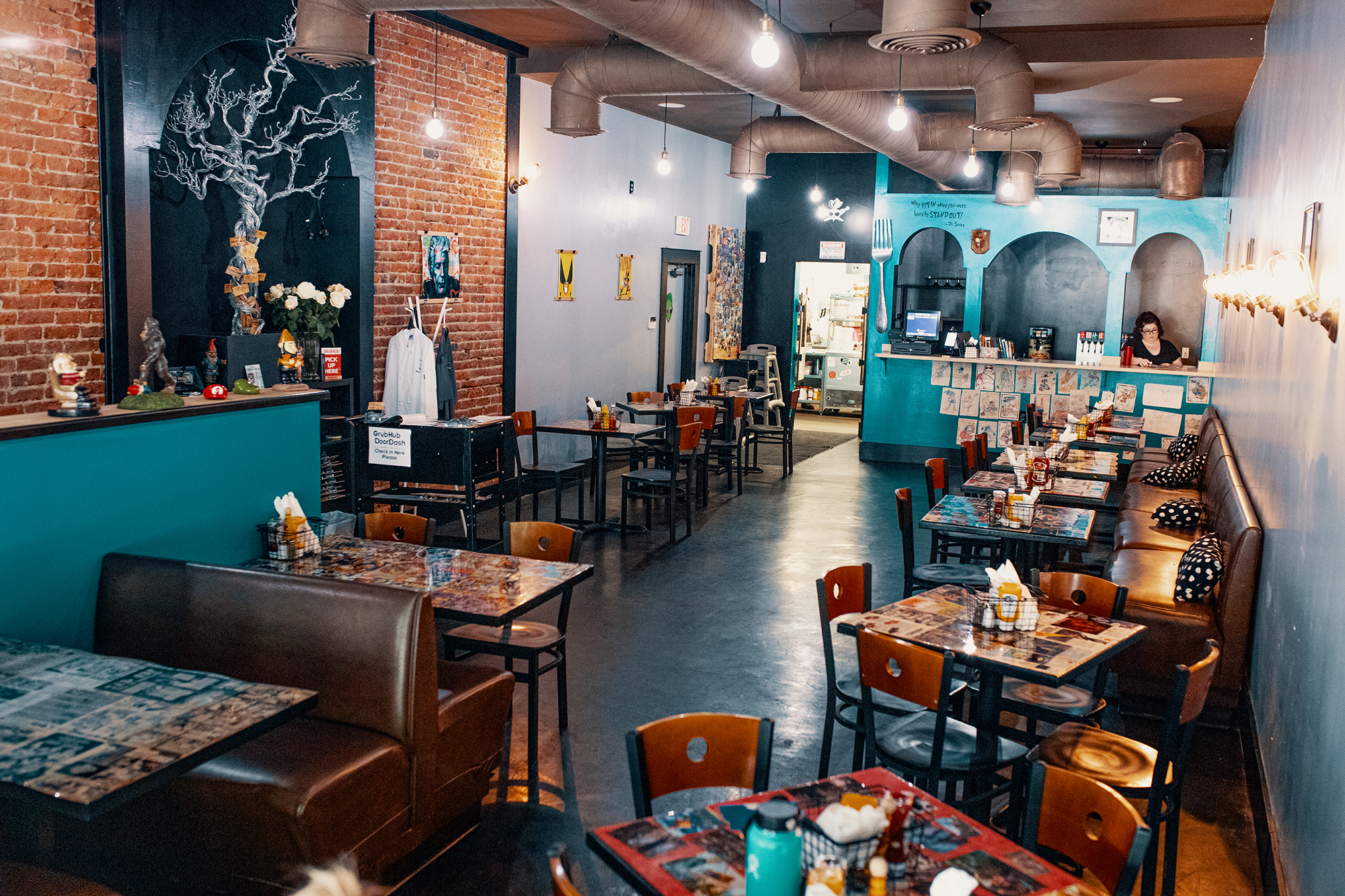 The brussels sprouts, which appear to be fried like french fries, are equally dazzling and surprisingly not very greasy. I couldn’t eat them all in one sitting, which is saying a lot, so sharing them might be a good option. If you’re not a fan of brussels sprouts, consider trying them here, anyway. I’m certain you’ve never had them like this before. I was also impressed with the plant-based burger options, which feature five different styles like one made of corn beans and mango, a broccoli artichoke burger, one made from mushrooms and faro, and a couple of cauliflower selections that look delightfully flavorful.

Once I got my dinner check (in the aforementioned Hardy Boys book), it was accompanied by an adorable small white plate with a 6-inch high tower of what appeared to be freshly made delicious blue cotton candy! It was a gorgeous, sticky-sweet way to end the meal.

The next morning, I showed up at 8 a.m. for breakfast, still in a daze over that amazing burger. This is where the pancakes shine. The server was attentive, quick with the coffee and charming to talk to. You can choose three classic pancakes made from the classic buttermilk or vegan, gluten-free or hoecakes (which are probably your mom’s favorite, if she likes corn, that is), so there’s nobody in your party who should feel left out unless they hate good things. This is when it’s hard to decide, with nearly 30 varieties to choose from that are separated into categories of nuts and chocolate,” “fruits” and the adventurous “Not Typical,” which has inspired choices like ancho corn, mac and cheese, and mushroom and onion. I wasn’t baked enough to try the latter section, so I went with a butter pecan option that did not disappoint.

The cakes were perfectly browned, and the smell of the fresh pecans chopped within the flaky batter hit my nose as soon as the plate hit the table. I put just a bit of butter and syrup on it, as they were so naturally sweet and wonderful anyway. I could barely finish half of them. For $10, it was a helluva meal. Fortunately, you can mix and match and choose more than one variety if you can’t make up your mind.

Culinerdy Kitchen deserves to thrive and succeed. The ambiance, staff and food are excellent, and if you park on E Street around the corner, it’s pretty accessible, as there are plenty of non-metered two-hour spaces to choose from.

Culinerdy Kitchen is located at 524 12th St., Sacramento. Their hours are Monday–Friday, 8 a.m.–9 p.m. You can find their menu at their website Culinerdykitchen.com