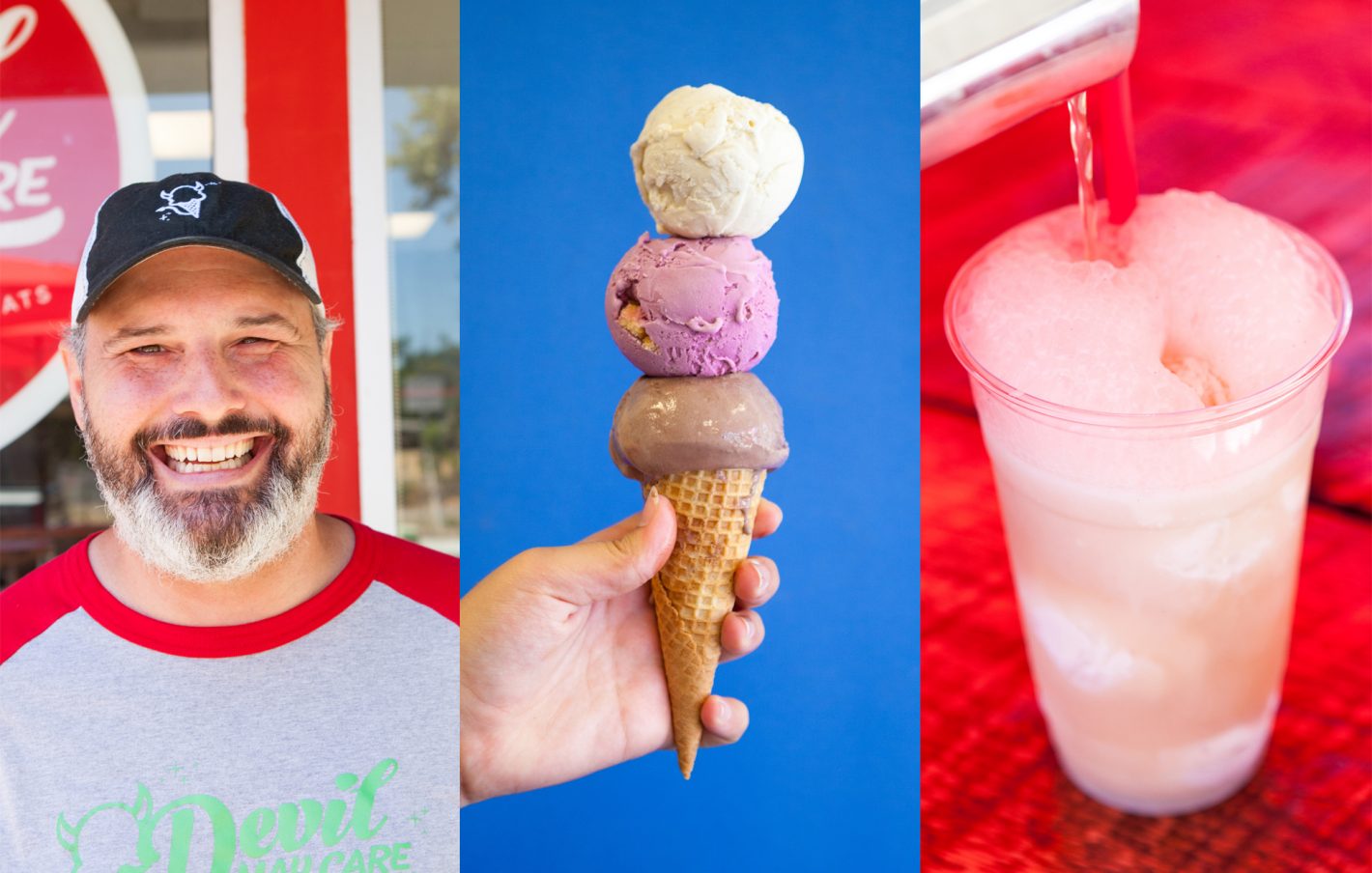 The scorching summer days are upon us, and with the temperature constantly lingering in the high 90s, thoughts of ice cream often consume my mind. Thankfully there’s Devil May Care, a new ice cream shop in West Sacramento. With their small batch ice cream and one-of-a-kind floats, Devil May Care is quickly becoming a go-to spot during these dog days of summer. Sure, there are many places in the area where you can get your ice cream fix, but how many of them source their ingredients from local farms, neighbor’s yards and the occasional river bank?

Devil May Care’s owner, Jess Milbourn, is no stranger to supplying tasty bites to West Sacramento. Milbourn was co-owner and chef of The Eatery, which was located on the opposite side of the city. After a little time away from the food scene, Milbourn was eager to jump back in, so with a little less stress and a little more rock ‘n’ roll, he rallied friends and family to join in on the fun.

“With any restaurant you have around 20 people, so you’re not going to have a tight-knit group like we do here,” said Milbourn. “Here the entire staff works together quite often and there’s a lot of cooperation between making and serving the ice cream.”

When talking to Milbourn, it is easy to see why he keeps choosing to open businesses in West Sacramento.

“I’ve been here forever, I grew up in the Rio Linda/Elverta area, but my grandmother lived on 6th Street here in West Sac the whole time,” Milbourn said. “My cousins all lived out here too. I was here every weekend. We knew we wanted to be in West Sacramento, we didn’t know that this area was going to develop like it did, but we really like this area and what it was becoming.”

As we continued our conversation, it became evident that Devil May Care is not just an ice cream shop, but already a community staple. 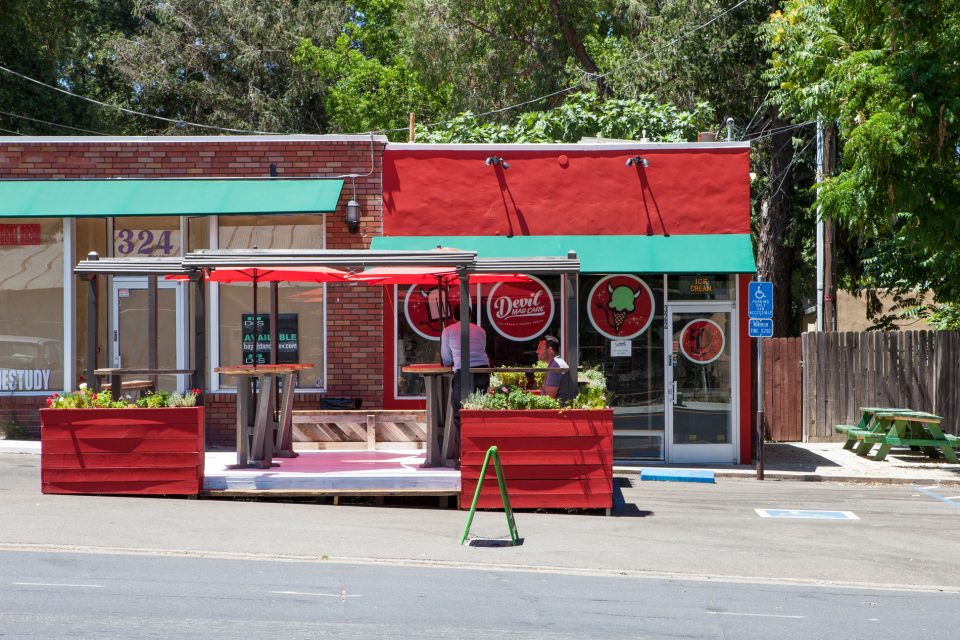 How long after The Eatery closed did you get the itch to return to the food business?
I bounced around a little bit doing freelance catering and it got to the point that I was two years out of The Eatery and I was like, “OK, do I want to get back into the restaurant business? Do I want to reopen The Eatery, do I want to open something else?”

What made you go the ice cream route?
I started to think about it realistically. I would be 45 years old jumping back into a 70-, 80-, 100-hour workweek. It just becomes a huge time commitment, a huge drain. I’ve got family, I’ve got other things I want to do now. I totally understand why you see 28-year-old chefs diving into it and doing it. I did it myself, but now I’m older and it wouldn’t be good for anybody involved. So we started looking into what was next—I say we because my wife is involved heavily of course—and we decided we wanted to go the retail route. So from there, the focus became ice cream.

Have you made ice cream professionally before Devil May Care?
I made ice cream for restaurants before, but never in a commercial setting. I can’t just make a gallon for a garnish of one dessert; it’s a different process. So I started by doing a lot of research and a lot of reading. I’m making 90 to 100 gallons of ice cream a week, so it’s a much different scenario than what I’ve been used to.

That seems like it would be a fun challenge. Were you nervous when you first started?
No, I love the fact that—even though I went to culinary school and have cooked forever—with something like this all of my professional training is gone. I’m starting from square one. I’ve never made ice cream consistently enough to be very well versed. I took this kind of weird turn professionally and I think you can find a lot of people doing that now. You just have to find the thing that you think is interesting and share your story. That’s what I’m doing when I’m sharing ice cream with people.

I can tell from Devil May Care’s Facebook live videos that you’re a big music fan.
I love music. I love rock music and all that comes from it. I don’t want to say we have rock ‘n’ roll ice cream or anything like that, but we’re trying to be a little fun … I don’t want to say [we’re] edgy because it’s ice cream, but we do stupid things sometimes, and we take risks, and we’re silly, we’re a little bit reckless and overall we just like to have fun.

It sounds like the ice cream business is a lot less stressful and a lot more fun than owning a traditional restaurant.
Yeah, I don’t want to have the stress that’s associated with a restaurant anymore. This has its own kind of stress. We’re still running a business, but at the end of the day, we’re making ice cream.

Many of your ice creams are seasonal and rotate frequently. How do you decide what kind of ice cream you’re going to make that week?
We don’t know what we are going to make until we start planning on Sundays. My ratio consultant comes in Sunday nights and we talk about what we want to do for the week.

You turn to the farmers markets for some of your ingredients. Do you try to keep everything as local as possible?
The West Sac farmers market is only once a month now, so we don’t get to go to that one as much, but we go whenever it’s happening. I use a couple local farms, like Kingfisher Farm in Winters that’s growing strawberries right now. It’s not always that way though. We rely heavily on Produce Express. We’re doing a P.O.G. (passion fruit, orange, guava) sorbet right now and I’m not able to get local passion fruit and guava, but we source local whenever we can.

What are some of your favorite flavors?
We did a chamomile kumquat ice cream recently; it was a perfect combination of flavors, and luckily we nailed it the first time! The kumquats came from a guy that lives right over here in an old West Sac neighborhood. He brought us in, like, 20 pounds of kumquats! And we picked the chamomile from right off the river bank. It’s neat because there’s this hyper local connection for me. I grew up here and remember picking chamomile with my grandma all of the time, so there’s this sentimental feeling I get about that ice cream.

It’s clear that the community has been very supportive, but how has it been working the city of West Sacramento? I hear the city is really supportive when it comes to small businesses.
Yeah, they are open to new businesses, but even more than that, they’re actively involved in making it happen. Every city councilmember, the mayor and people in the city offices are so supportive and easy to work with. Looking back to when we opened The Eatery, it was my first time going through any of it and I couldn’t have imagined doing it was an easier group of people. The city is super easy to work with and everyone is very supportive. Not just in helping business happen but creating a business environment too.

What does the future hold for you and Devil May Care?
Right now, the goal is to expand the ability to produce more ice cream, so moving to an industrial park somewhere to be able to make more ice cream more efficiently. I don’t think that this shop will sustain a standalone production facility, so concurrently I would like to open another shop like this. In the immediate future, I would like to just expand the menu. That’s the biggest thing that we want to do right now. I would also like to start making milkshakes. We can make novelty items, we just don’t have the capacity to do them all of the time. They are so much fun to make and people love them! And in a really cool world, I would like to develop a cone that looks exactly like the logo. That would be a neat thing! I would love to focus on the innovation and novelty stuff a lot more, but really I just want to make good ice cream.

Devil May Care is located at 322 Third St. in West Sacramento. Pay them a visit in person or online at Devilmaycareicecream.com.