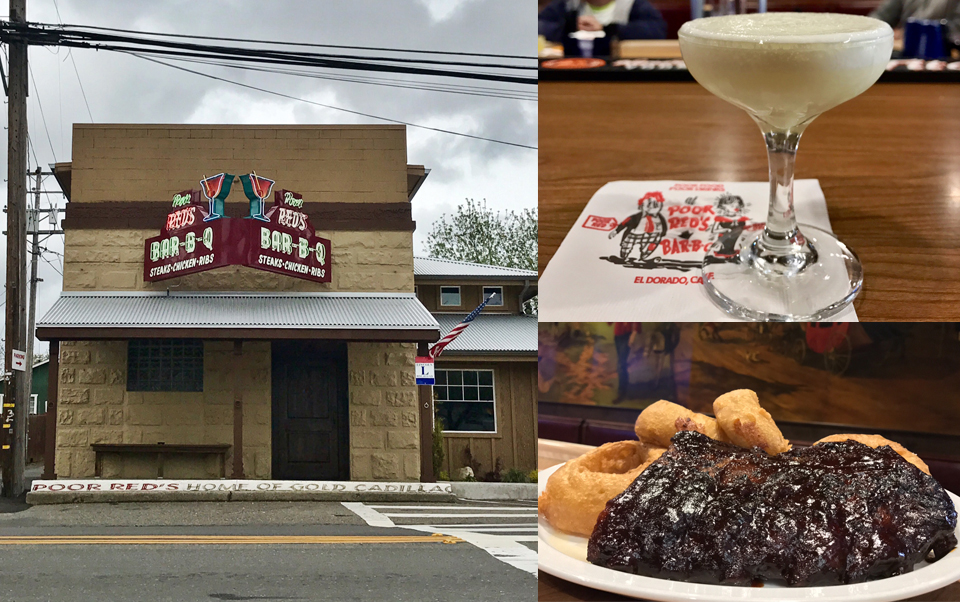 There are so many exciting new bars and restaurants popping up in Sacramento these days, but let us not forget about the well-established businesses that have been in our community and surrounding area for years. In the bypassed town of El Dorado sits such an establishment named Poor Red’s. It has been many years since I last stepped foot inside Poor Red’s. Back then it was an uninspired bar with its storied past neglected and energy exhausted. Recently, Poor Red’s has gone through an ownership change and a much-needed facelift including an expanded restaurant and refurbished interior.

The biggest fear when new owners remodel such an established business is losing the charm and history of what makes a place like Poor Red’s worth visiting. Luckily, the original structure was treated with kid gloves. The well-known murals on Poor Red’s walls are a perfect example of how the building’s history was respected and even brought to the forefront when changes were implemented.

Instead of painting over the dingy western scenes, bar manager Nate Jackson proudly pointed out what was found once the murals had been restored.

“We took the tobacco off of them and look,” Jackson exclaimed. “You can still see where people used to put their cigarettes out!” 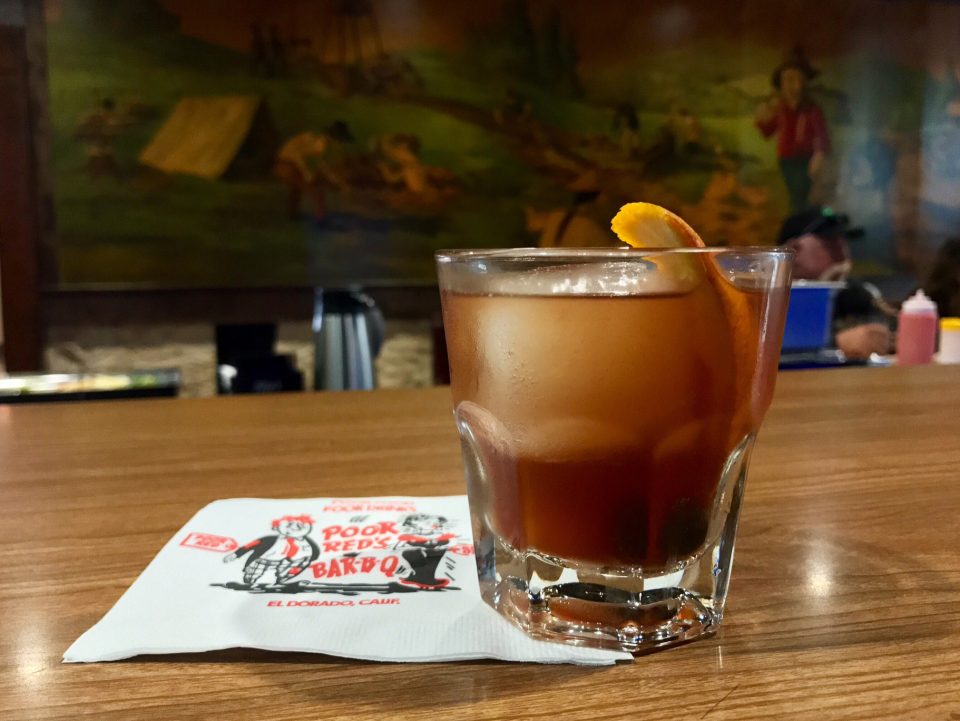 Even the photograph of Poor Red and his wife, Opal, that had to be moved during the remodel was placed right next to the front door so patrons can pay their respects when exiting the building.

And it is with that enthusiasm for Poor Red’s past that the local bar and barbecue joint operates today.

“This place was a Wells Fargo stage stop, so if you owned a company supplying the miners, you might order a crate of shovels from back east to be delivered here,” said Poor Red’s general manager and history enthusiast Steve Anderly. “They would ship items to San Francisco, then they’d come off the ship and go into a steam ship and head up the Sacramento River, then loaded onto a horse and buggy, then it would come up here where you would pick them up and sell them to the miners.”

From there Poor Red’s was a Doctor’s office and a grocery store. Then, in the late 1920s, the building finally became a watering hole known as Kelly’s Bar. 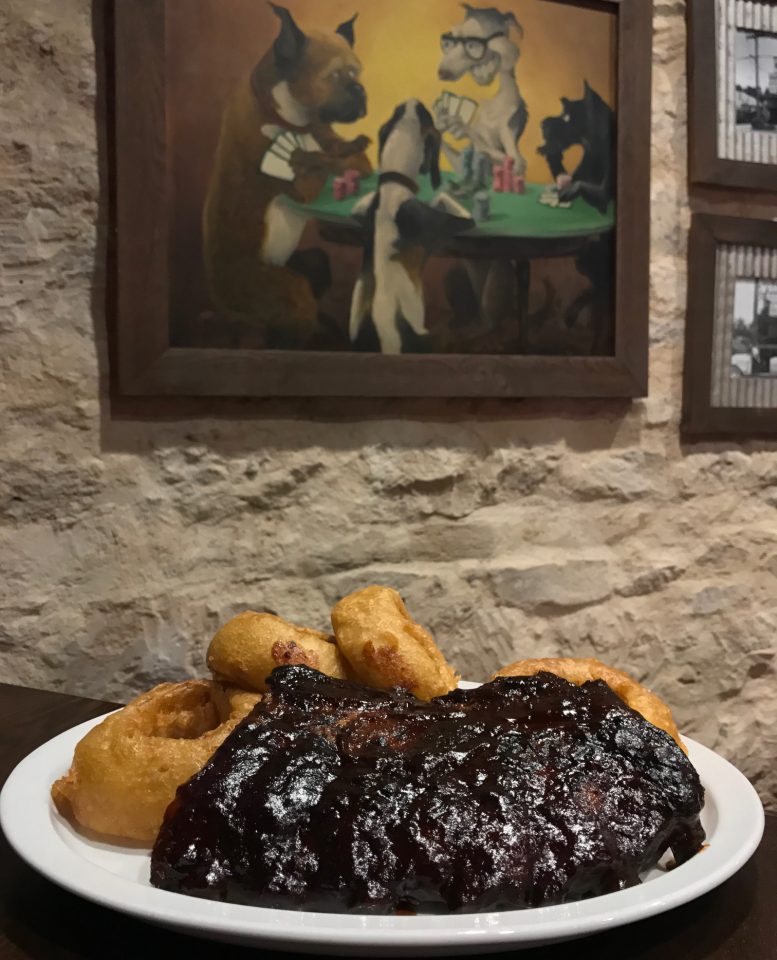 “Kelly operated the bar and then went into business with Red who sold barbecue out of the back of the building,” said Anderly. “In 1948 Red and Kelly got into a fight and they wanted to dissolve the partnership, so they had a dice game and whoever won got to choose either to be bought out or buy out the other guy. Red won and he chose to buy out Kelly. So Red got rid of the Kelly’s sign and turned the place into Poor Red’s.”

And if you’re wondering where the name “Poor Red’s” came from, Anderly has an answer to that as well. “It was Poor Red and Rich Opal,” said Anderly. “Opal was his wife and all of the money he made, she took.”

Once inside the building, there’s one thing you must do: order a Golden Cadillac. The drink that put Poor Red’s on the map contains crème de cacao, and of course Galliano—Poor Red’s uses more Galliano than any other bar in the world. Thick, frothy and milky white, this blended digestif is the perfect drink to kick off your step back in time, but be careful: this drink can sure pack a punch.

The Golden Cadillac was created back in 1952 when a couple from San Francisco—who frequented the bar when driving up to Lake Tahoe—drove up one day with something to celebrate.

“Well, they got engaged and quickly purchased a gold-colored Cadillac,” said Anderly. “So they came in—there was a bartender named Frank Cline—and they said, ‘Frank, we want you to create a drink for us that commemorates our engagement and the gold Cadillac we just bought.’ So Frank spent the afternoon making different concoctions and they didn’t like any of them. Finally, Frank came up with the recipe for the Golden Cadillac as we know it today and they loved it.”

And don’t worry about ordering a blended drink at a bar that’s known to be frequented by a crowd known for their leather jackets.

“You have rough-looking bikers sitting at the bar next to farmers, grandmas and wine tasters,” Anderly laughed. “They’re all sitting at this horseshoe bar and they’ve all got frou-frou drinks in front of them, having a great time.”

If the Golden Cadillac is the first thing you should drink at Poor Red’s, I would suggest not leaving until you experience their version of an old fashioned. Created by head bartender Stacy Talhoun, this old fashioned’s ingredients include a brown sugar cube, Luxardo cherry Juice and a squeeze of a fresh orange. A fun twist to a classic drink with alterations that only complement the original. This is the drink you’ll crave once leaving Poor Red’s. 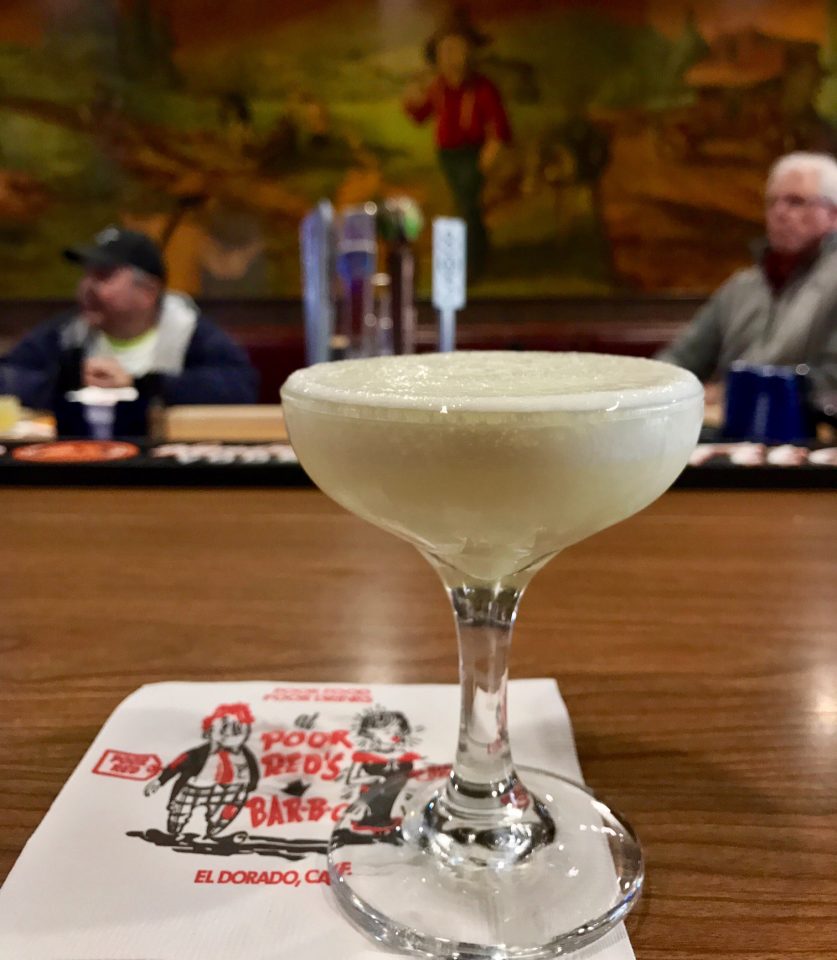 It may be easy to do, but don’t overlook the food at Poor Red’s. With the expansion of the dining room, the owners have committed to providing food that easily surpasses your average bar and grill. Using local ingredients—including the wood they smoke with—confirms that the focus is not only on the bar. I stopped in around lunch time and ordered their signature ribs with a side of onion rings. The tender, flavorful rack comes coated in Poor Red’s BBQ sauce, which adds a perfect balance of tang and sweetness to the savory, smoky meat. And don’t sleep on their onion rings. Made to order using thick-cut Walla Walla sweet onions, the rings are generously dunked in a Newcastle brown ale batter then fried to pillow-y perfection.

After spending a couple of hours in Poor Red’s you feel like you’ve been frequenting the place for years. Poor Red’s is inclusive if not anything else. With that in mind, it’s a dark bar serving barbecue in the Sierra Nevadas; not necessarily a place you would bring a family of four for dinner.

“This is not a rated-G bar or restaurant. This isn’t Applebee’s or BJ’s. We don’t have high chairs or a kids menu and that’s on purpose,” Anderly said. “If kids come in here, we don’t kick them out, but we don’t encourage people to bring their family here. This is a place to bring your date, a place to hang out with adults.”

Which makes perfect sense. Especially when you consider the building’s origin.

“This building was built in the 1850s,” Anderly said. “There wasn’t plumbing or electricity. This was the Wild West right here, and this intersection of 49 and 40 was a major intersection. I just think that there’s a vibe in that. You come here from Sacramento or San Francisco and you’re sitting in the Wild West.”

Poor Red’s is located at 6221 Pleasant Valley Rd. in El Dorado. Bar and restaurant hours vary, so be sure to check out Poorreds.com or give them a call at (530) 622-2901 for more information.