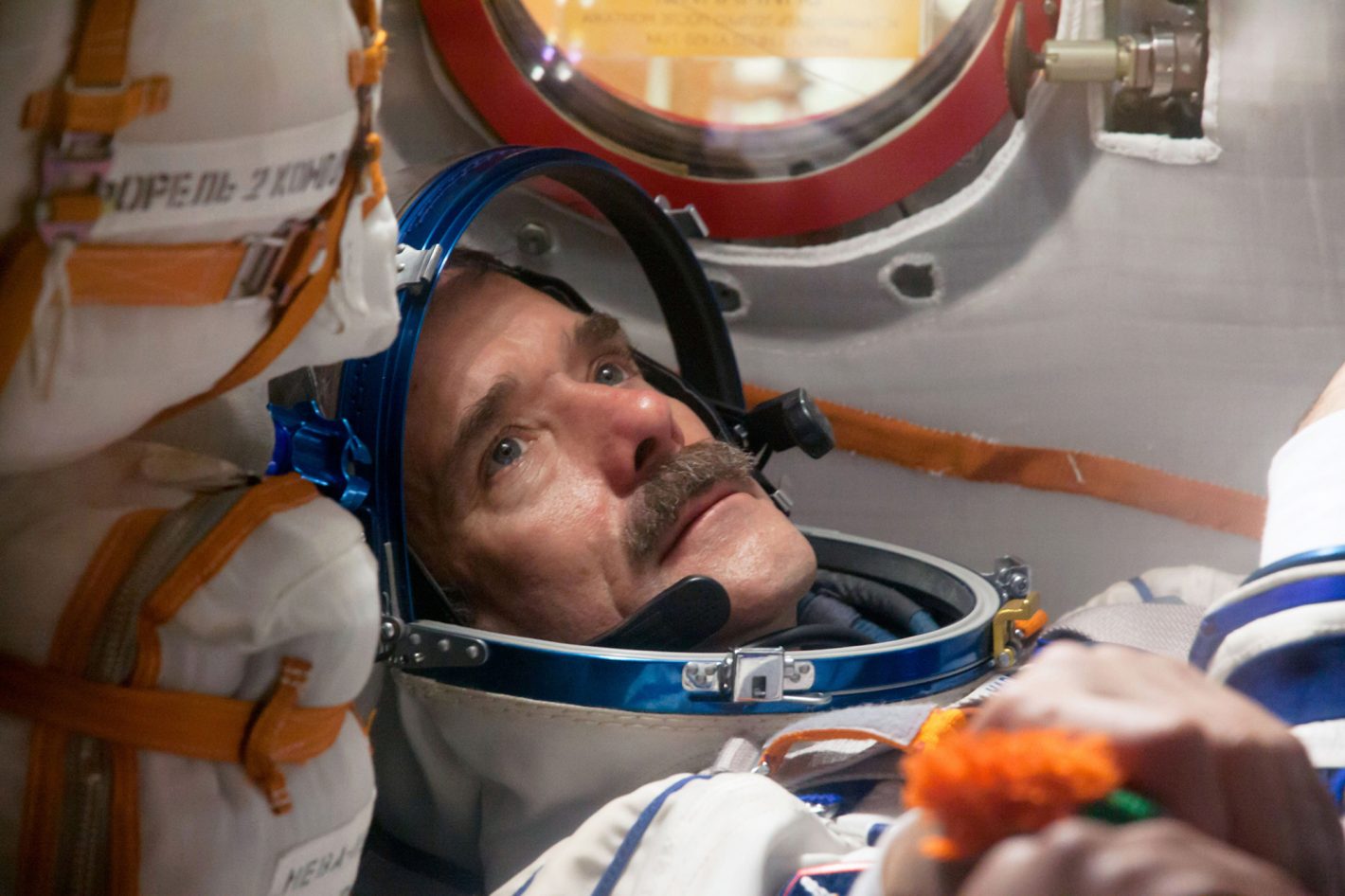 Chris Hadfield has gone to space, maaaaaaaan! He’s been on two different Space Shuttle missions, and has been aboard both the Russian space station Mir and the International Space Station. By his own account, he’s orbited Earth more than 2,500 times. This should be enough for any person to be satisfied with, but Hadfield hasn’t stopped there. A video of him covering David Bowie’s “Space Oddity,” recorded on the ISS, currently has 43 million views, which is more than Bowie’s official video for the song has. He’s written three books, recorded an album, is a guest on many popular podcasts and currently has a Master Class on “How to be an Astronaut.”

Somehow, with all of this going on, Hadfield has found the time to play in a band he co-founded 14 years ago, comprised entirely of other astronauts.

Bandella was formed by Hadfield while he was stationed in Star City, Russia, which is also the hometown of pioneering Russian cosmonaut Yuri Gagarin. The band, which also includes Cady Coleman on flute, Micki Pettit (astronaut Don Pettit’s wife) on vocals, Joe Schmid (a two-star general and NASA Flight Surgeon) on bass, Steve Robinson on guitar (and for the Winters show, Dave Webb on keyboards) uses a mix of audio and video storytelling along with folk music originals and covers of standards.

The band is coming to The Palms Playhouse in Winters July 6, and I had a wonderful time talking to Hadfield over the phone. He was able to talk about his experiences in space so artfully and eloquently, I felt as if I was floating right there with him while I listened on the other end of the line. When I interview comedians and musicians, I’m quick to throw in follow-up questions and throw in my own two cents, but Hadfield had me dumbstruck and in awe over the things he was able to see and experience. 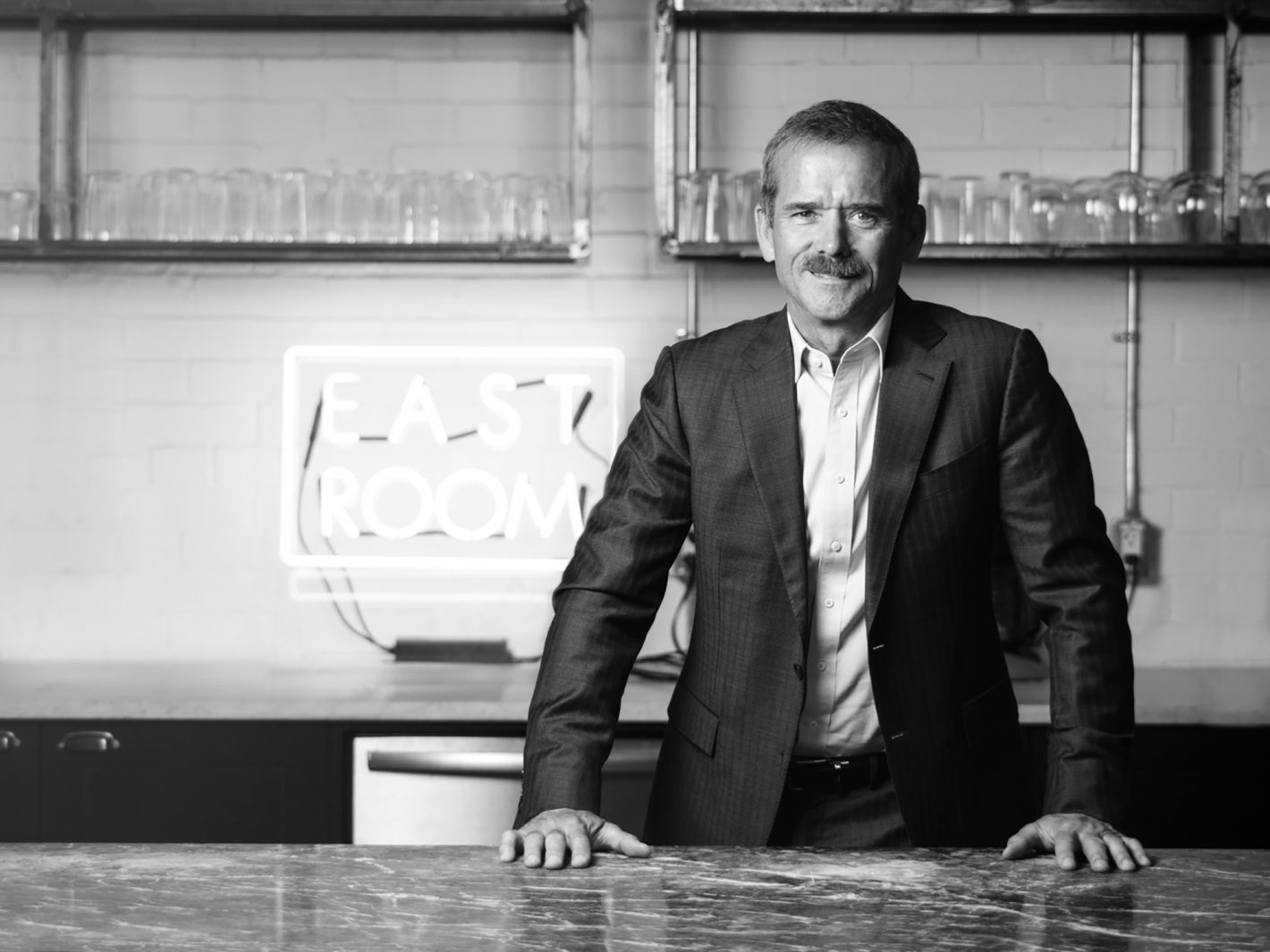 How different is playing guitar in space compared to playing on Earth?
It’s quite different. There are a couple of distinct gravity driven features on a guitar. It’s got that hourglass shape so it can sit on your knee, gravity snugs it down there and it’s got that nice cut-out that’s a knee-width. The guitar will fit there securely so it frees up your hands. Or if you’re playing standing up, we attach a strap so that gravity suspends it. Without gravity, neither of those mechanisms work, so your guitar is floating free. Playing the guitar is a two-handed activity so when you move your hand up and down the fretboard, there’s nothing to hold your guitar still. So it wants to take off all over the place. You have to find a new way to stabilize your guitar to play it properly. If you watch closely at the videos of me playing guitar in orbit—I did a song with The Chieftains and The Barenaked Ladies and a cover of Bowie’s “Space Oddity”—but in all three of those, I’m pinching the box of the guitar under my right bicep. It holds the guitar still, but unfortunately, it’s the reverberation of the soundbox that allows the guitar to ring, and if muffles that very slightly, but it’s the best I can do. It’s hard to play it precisely. It’s almost as if you leaped into a swimming pool and while you were lying on your back floating, you tried to play.

It’s like trying to hold a wet dog.
It’s also hard to sing because it’s a little bit like standing on your head for three hours, then singing. There’s nothing to drain your sinuses because we rely on gravity for that. Without gravity, your sinuses are perpetually full. The resonances that come out of the hollows in your head helps you hear the music and it also helps the tonality. Also, your lungs and your diaphragm are slightly pushed down by gravity. Try lying on your back or standing on your head and singing. It’s just mechanically different. It’s harder to get the bass reverberation. It’s not bad for hitting the high notes as I did in “Space Oddity.”

You had mentioned that your tongue becomes weightless, too?
Your lips and your tongue are always governed by gravity. Your tongue rests on the floor of your mouth, and I hadn’t even thought about it. When I landed back on Earth after my third spaceflight, which was the longest of the three, I remember thinking, “Oh, I need to lift up my tongue.” I forgot that even a tongue has weight. You get used to weightlessness, then you have to re-adapt to being in gravity again.

When you spend time in space and come back, and you think about the time you were up there, what’s one of the things you miss the most?
Weightlessness is a beautiful, liberating, magical thing. You suddenly have an undeniable super-power. You can fly. And you can effortlessly and endlessly fly. That’s a wonderful thing to use the full three dimensions of the room you’re in, where there’s no ceiling and no floor, it’s just a volume that you can move around in. Weightlessness is like a toy that never winds down. You can play with it perpetually the whole time.
Another thing is going around the world every 90 minutes. You get to see the world with unfettered clarity and growing familiarity. You become very intimate with the entire world and every place on it. Every place becomes equal. It’s unbelievably beautiful. It gets even better and better looking at it over time. Just like any place, when you first walk in, you’re a little bit gobsmacked. But after you’ve been there awhile you start to see the subtlety and the nuance, and the color, and the shadows, and the textures of things. If you spend 10 minutes or 10 hours or a week looking at the Mona Lisa or the Sistine Chapel, you’re going to see different things. The world is just more infinitely complex than any of those things.

The last thing I miss is a combination of those two: being outside on a spacewalk. It’s the most visceral of all the experiences. You have nothing constraining you except your suit and clothing. There’s nothing between you and the universe except the curve of the plexiglass of your visor. You get a very frank and direct physical appreciation of being out in the universe and having the world separate from you. The world does not have any feeling of home from there. The world is just a planet. It’s like looking up at the moon. When you look up at the moon, you don’t feel like you’re on the moon. It’s the same thing doing a spacewalk. You’re looking at the world as a separate and somewhat foreign planet. While I was outside, we actually went through the aurora, through the southern lights. I had my eyes night-adapted at the time. I saw all of the colors. The greens and red of the aurora were pouring around the ship, between my legs, all around us. There are other trace colors there as the gases fluoresce, so it’s multi-spectral. It’s just beautiful.

I don’t miss those things so much as I revel in being able to have experienced them.

You don’t often see astronauts sharing their experiences with the love and clarity that you do. Did you find explaining this to people that have no comparable experience to be easy?
Spacewalking is said to be the rarest of human experiences. Out of the hundred billion people or so that have ever lived, there’s only been about 200 that have ever walked in space. It’s as unique and privileged and rare as anything that anyone has ever done. I think it deserves some thought and effort as self-expression. I served as an astronaut for 21 years, which is about as long as anybody works as an astronaut. Neil Armstrong was an astronaut for eight years, so 21 years is a long time. And being Canadian, my opportunities to fly were fewer than my American contemporaries, because we don’t build spaceships. We’re there by the grace of international partnership. I’m also one of the few Canadian astronauts. Because there are less of us, that gives us more of a public role. I have a lot of chances to speak about my experiences. NASA set the standard by brazenly sharing the experience [of the first moon landing]. They could have kept the whole thing quiet, but they decided it was too important to keep to themselves, so they broadcast the whole thing live. It’s too magnificent of an experience to squander. That’s why I share it.

Do astronauts ever play practical jokes on each other in space?
Of course, all of the time. We’re just people up there. We’re as busy as can be. We’re running about 200 experiments in the space station, and there’s mission control in Houston, Munich, Moscow, Montreal and Tokyo. They all think they own you, so you have a schedule of what to do down to five-minute intervals for the whole six months you’re up there. There’s not much in the way of free time. You can get some stolen free time, but that’s about it. It’s fun to hide in unusual places and pop out at people.

Because it’s such a demanding work environment, normally instead of a practical joke, we’ll play a kindness on each other. Like going around the ship and bringing each person something cool to drink, or a piece of a chocolate bar. That is so welcome because it is such an immense amount of unrelenting work, every single day for six months.

We have races of how quickly you can get from one end of the space station to the other, or who can do the most somersaults without banging into the wall. You can get up into the hundreds if you do it properly.

You can see Chris Hadfield and the rest of Bandella at The Palms Playhouse (13 Main St., Winters) Saturday, July 6. at 8 p.m. Tickets are available at Palmsplayhouse.com. You can visit Chris Hadfield’s website at Chrishadfield.ca. It’s in Canada.