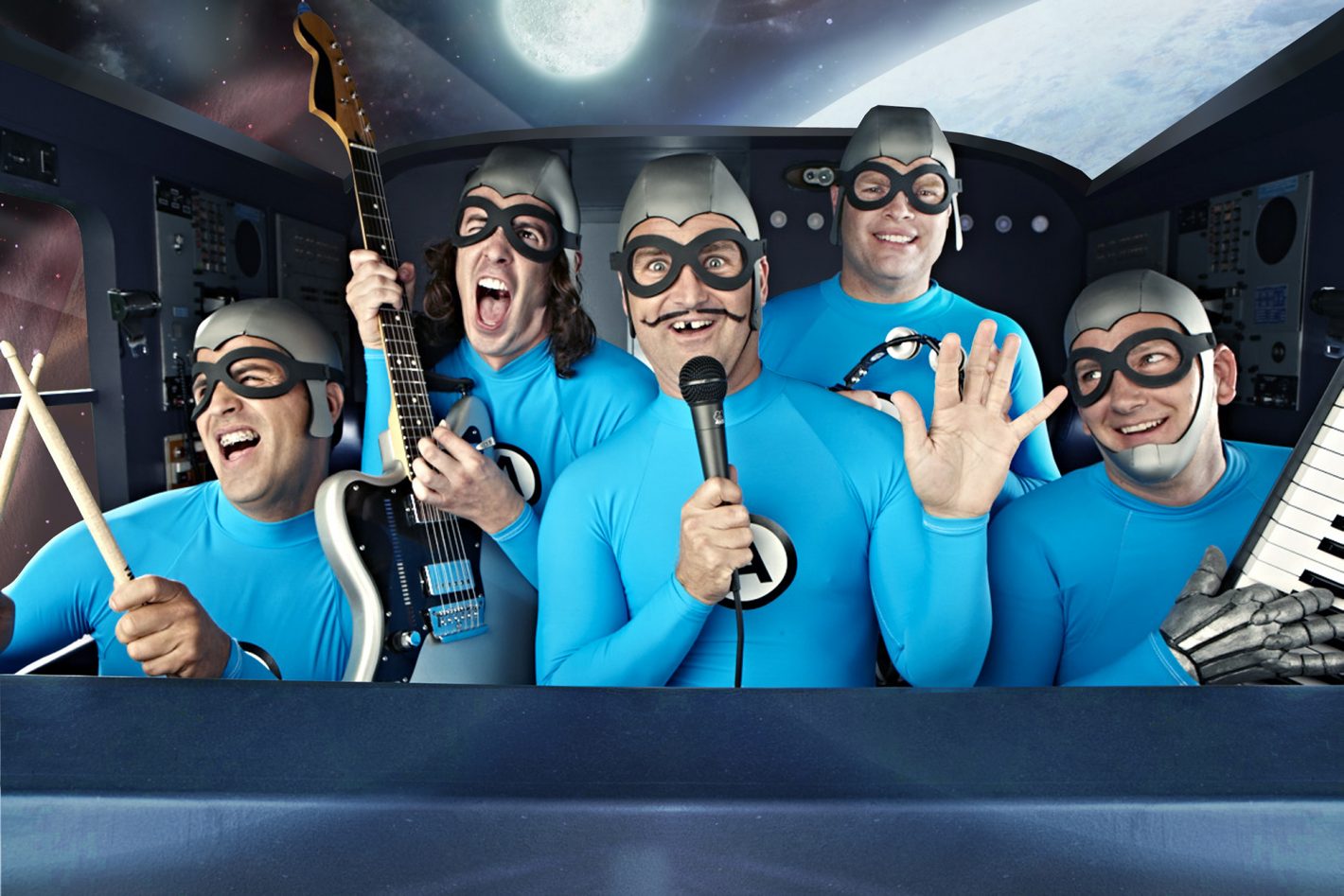 After almost 25 years of donning their costumes and fighting off evil villains like the Powdered Milk Man, EagleClaw and of course The Sandfleas, The Aquabats are still going strong. Though it has been seven years since their last album, and more than four years since their television show, The Aquabats! Super Show! went off the air, the band continues to play sold out shows across the country.

However, finding time to get together can be kind of tricky for The Aquabats these days since all of the members (Ricky Fitness on drums, Eaglebones Falconhawk on guitar, The MC Bat Commander on vocals, Crash McLarson on bass and Jimmy the Robot on keys) have careers outside of the band.

The band’s Kickstarter campaign came to be due to their fans’ requests for more albums and live-action content, which is difficult to produce without a record label or television network support.

“We all have other jobs doing other things like paying the bills and things like that,” said Christian Jacobs, aka The MC Bat Commander. “So the whole idea was to connect with our fans and be able to keep doing it and extend it into another year.”

The Aquabats have been successful in reaching their minimum Kickstarter goal. This guarantees a new album and six mini episodes of their live action adventures. The more they raise, the more content they will be able to create, which is why they have decided to extend their campaign’s closing date to the end of September.

“We’re extending it another month, because the fans wanted us to keep going,” continued Jacobs. “They wanted more time to push it further. We also thought that being on the road and doing the Kickstarter would help get the word out better, so we have six or seven shows in September, and we just want to make sure that all of the people we are playing to know that it’s happening.”

During September, The Aquabats will be playing in Sacramento, San Francisco and Cleveland, as well as Riot Fest in Chicago.

The band’s Kickstarter video is filled with guest appearances from many comedians and musicians including Jack Black, Weird Al Yankovic and Thomas Lennon, but one of the more surprising appearances was by the Robert Smigel-voiced Triumph the Insult Comic Dog.

“Robert Smigel, he and his kids are huge fans of the TV show,” said Jacobs. “He actually didn’t even know about The Aquabats, the band, before the TV show. We’ve just been friends with Robert and his kids for the last five, six years … He wrote us a letter and was like, ‘This is amazing. You guys, this is really, really good! You guys are making an awesome show and I can’t wait to watch it with my kids every week.’”

After receiving such a letter, The Aquabats were taken aback.

“For us, obviously huge fans of comedy and huge fans of Triumph and Robert Smigel’s Saturday TV Funhouse and Saturday Night Live, we were just shocked,” said Jacobs with glee. “This is a comedy legend telling us that we’re funny, you know. So that was really cool, and he’s been super awesome with the Kickstarter, so we’re trying to figure out some family friendly ways to weave Triumph into the show, too.”

However, Smigel isn’t the only member of the comedy community who has embraced The Aquabats.

“A lot of comedians I think get what we are doing,” Jacobs said. “Patton Oswalt is one. We’ve had Matt Walsh from Upright Citizens Brigade [on the TV show], Noel Wells, who was on Saturday Night Live and Master of None, we were the first television show she was on. So many comedians you wouldn’t think would be into The Aquabats have been really supportive.

“Also, we work with Mike and Matt Chapman who have done Homestar Runner … There’s a lot of weird connections that we’re surprised we have. We’re always like, ‘Wait! You like our band, too? That’s awesome; we like you!’”

Another unlikely appearance was by their old bandmate, drummer Travis Barker aka The Baron von Tito. Seeing Barker, in an Aquabats uniform again was something that I thought I would never witness, and at least for a while, Jacobs felt the same way.

“There was a time back in the day when he [Barker] first left the band and Blink just blew up and we didn’t communicate too much,” said Jacobs. “He was busy, and you know, we were kind of in the rear view mirror at that point.”

Years passed, Barker became a father, and the craziness of Blink-182 died down. That’s when the past bandmates started running into each other again.

“He came by the set a few times when we were doing Yo Gabba Gabba! [Jacobs was co-creator of the children’s show] and we worked with him on some remixes and stuff, so we’ve been in touch over the years,” said Jacobs.

This past year, Barker was also spotted reuniting with The Aquabats on stage while celebrating the 20th anniversary of the album he played drums on titled, The Fury of the Aquabats!

This reunion might not have happened if it wasn’t for a chance meeting in a vegan restaurant.

“Our bass player Crash was working, he was doing the electrical at a vegan restaurant in L.A. and he ran into Travis,” said Jacobs.

That’s when Barker brought up the idea of joining forces once again to celebrate the 20th anniversary of The Fury of the Aquabats! by possibly touring.

“From there The Fury tour idea that Travis came up with actually turned into two shows that we did in L.A. It’s pretty cool, like 20 years later, I think there was a time when we never thought we would maybe ever talk to Travis again, just because his trajectory and the way he was going in his life was totally different than where we were,” said Jacobs. “It’s cool that it’s all come back together, and we’re all friends and that we can trip out on the last 20 years.”

By going the way of crowdfunding, The Aquabats will have complete control of the content they produce, which seems to be freeing, especially when it comes to the live action show.

“Whenever you work with a network on a show, you’ve got your vision on what you want the show to do and how you want it to reach people,” explained Jacobs, “and then they’ve got their agendas and most of their kind of agendas are directly tied to ratings and revenues.”

The mini episodes that The Aquabats have recently created in relation to their Kickstarter display exactly what they intend to do without a network looking over their shoulder.

“They’ve been weird and strange and kind of whatever we want to do, and there’s no one there telling us, ‘No, you guys can’t do that,’” said Jacobs. “It’s just been us. So we’ve been able to serialize them, which networks don’t like. They want standalone stuff. We started out wanting to go the traditional route and raise money to do long form episodes, but we realized that for the same price of one episode we did, we could do like 10 or 15 mini episodes and essentially create this little, short form content—fun little things that we can serialize and make fun for people to tune into.”

With a promising year ahead that is already guaranteed to include a new album and a handful of Super Show! episodes, Jacobs reflected back on the past 25 years and recalled how The Aquabats began.

“Crash and I were roommates, and we were bored and just started writing songs,” he reminisced. “I didn’t even know him before we were roommates. We weren’t even friends before, so it just kind of was a happenstance thing that started this 25 year journey, and now we’re just trying to keep it going for a whole new generation. I think the most fun thing is that we started The Aquabats as a fun way to be silly and entertain ourselves and now we look back and we’ve seen kind of the fruit of all the time we spent being in the band.

“We’re not anywhere close to Coldplay or U2 or anything,” Jacobs said while reflecting on his band. “But at the same time, to still be able to be a band and go out and draw an audience after 25 years, especially an audience full of young kids. It’s pretty awesome. It’s pretty crazy.”

The Aquabats will play Ace of Spades (1417 R St., Sacramento) on Sept. 22, 2018, at 6 p.m. Also performing will be Kepi Ghoulie and Dog Party. Tickets to this all-ages show are $22 in advance and can be purchased through Aceofspadessac.com.