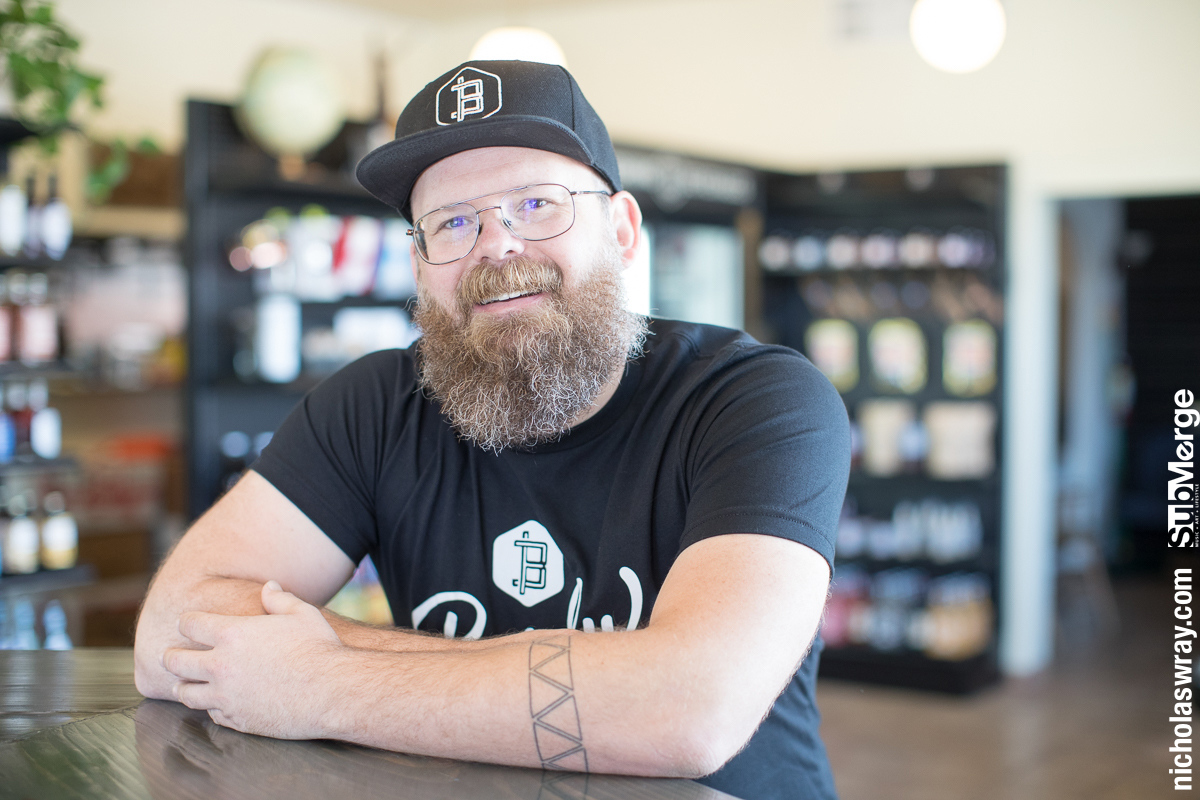 Syrups, shrubs and switchels—oh my! Burly Beverages is knocking on the door of Sacramento’s refreshment norms with a bunch of old time-y taste sensations. Now admittedly, I was not too familiar with shrubs and switchels until I met Burly Beverages owner Gabriel Aiello. Aiello is more than happy to educate anyone on Burly’s syrups and beverages and has recently opened a tasting room in North Sacramento for those with inquisitive palates to explore the unique flavor combinations of his creations.

So what is a shrub, you ask? A shrub is a syrup made of fruit juice, sugar, vinegar and a few other ingredients depending on the flavor. Shrub syrups are commonly found in cocktails, but Burly has created a line that makes for a most refreshing beverage when added to seltzer water or club soda. With flavors like Pomegranate Pink Peppercorn and Grape Clove, these shrubs are sure to boost any Sacramento summer day with or without spirits.

If you are someone that likes to stick to the classics, look no further than Burly’s cream soda. Steeped in the belly of a Western saloon and stemming from a formula that dates back to the 1800s, Burly’s cream soda is filled with traditional ingredients including cinnamon bark, vanilla beans and a bit of cream of tartar.

I met up with Aiello at his recently opened tasting room on Del Paso Boulevard in Sacramento. There I learned about the importance of seltzer bubbles and found out how an exploding linen closet led to his production of syrups. 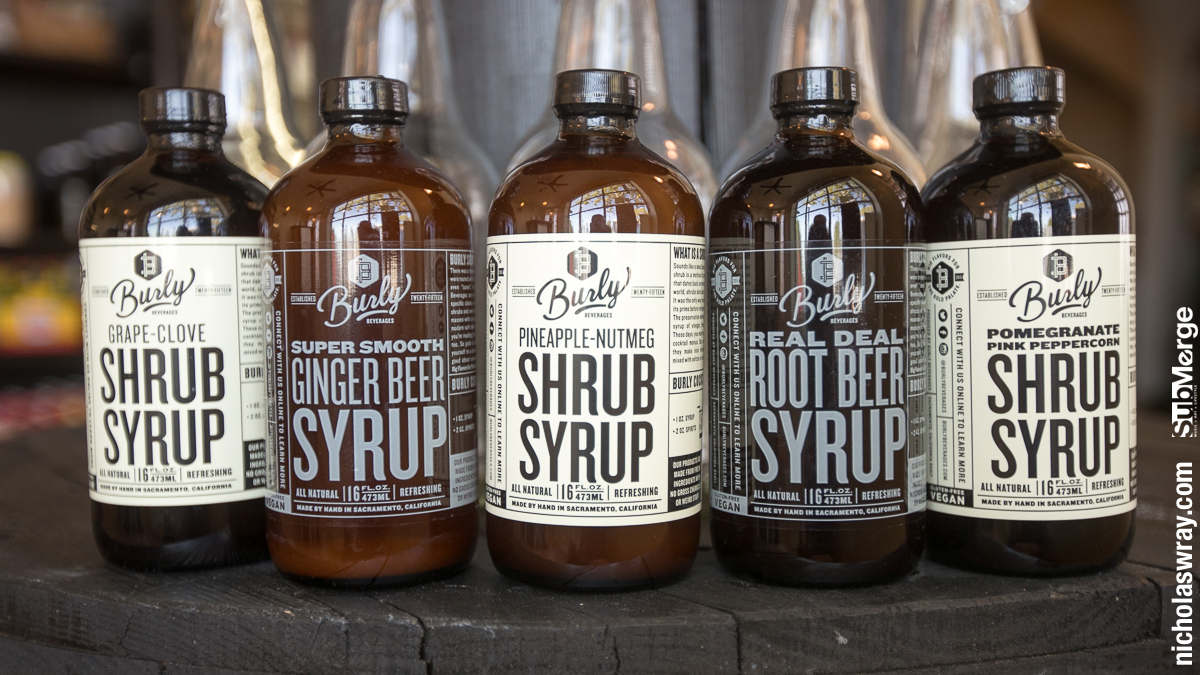 This is an impressive setup. Where were you guys working out of before you settled in here?
I started production at Preservation & Co. I was on staff there making pickles and bloody Mary mix and the owner Jason let us use the kitchen there as our initial production facility, but he quickly outgrew being a commissary and needed his kitchen full-time.

Where did you guys go after leaving that space?
After that, we were working out of Lulu’s Kitchen over on 16th and G. It’s pretty much the only commissary on the grid, and because of that they are pretty much booked solid. They were able to give us only four hours a week on Mondays.

Oh wow! That’s barely any time to work.
We had to bring all of our equipment in and bring it all out when we were there. We were bringing in all of our pots, ingredients and bottles every time, so I couldn’t grow the business at all at that point. I couldn’t take on new restaurants or bars. I couldn’t try to go to grocery. We were stuck where we were. It was a complete stopgap. At that point we needed to get out of the situation we were in.

How did it feel to finally have your own space?
We were nervous about having the overhead without having grown the business, but we just jumped into it.

I really like the feel of this location. Did you always have this neighborhood in mind?
There’s an organization down the street called Sierra Service Project … They knew we were looking and told us about this place off of Del Paso. We were hoping to be in the Midtown/downtown area, but the prices were too high. If we wanted a place that was already built out as a restaurant with a hood and stove it would have been way above what we were capable of paying.

Just walking up and down the street here in Del Paso you can feel that there’s a new energy in the area with businesses like yours settling in. How do you feel about being here now?
We really came here with no intention of changing the neighborhood. We just needed a place to cook, but now we’re part of this revival and that is really exciting! This area is so cool!

Did you decide to go into the beverage business while you worked at Preservation & Co.?
Well, I worked at Sun and Soil before that. I helped them get started, I operated their juice press and kind of managed the front for them. When I worked there, I started learning about flavor combinations and beverages and started experimenting at home with ginger beer. I had given up soda about three years before that and started really missing ginger beer with my whiskey and bourbons.

Why did you decide to make your own instead of using other ginger beers on the market?
I just wanted a good ginger beer, and the ones that I found that had good ingredients like Bundaberg or AJ Stephans, they use good ingredients, but it just wasn’t gingery enough for me. I could drink it, but it’s just not what I was looking for. I watched an episode of Good Eats with Alton Brown—it was the ginger episode where he makes ginger beer and ferments it with bread yeast and carbonates it that way. I tried it, and it was OK, but it tasted like bread. I started messing around more … using Champagne yeast, ale yeast and lager yeast. 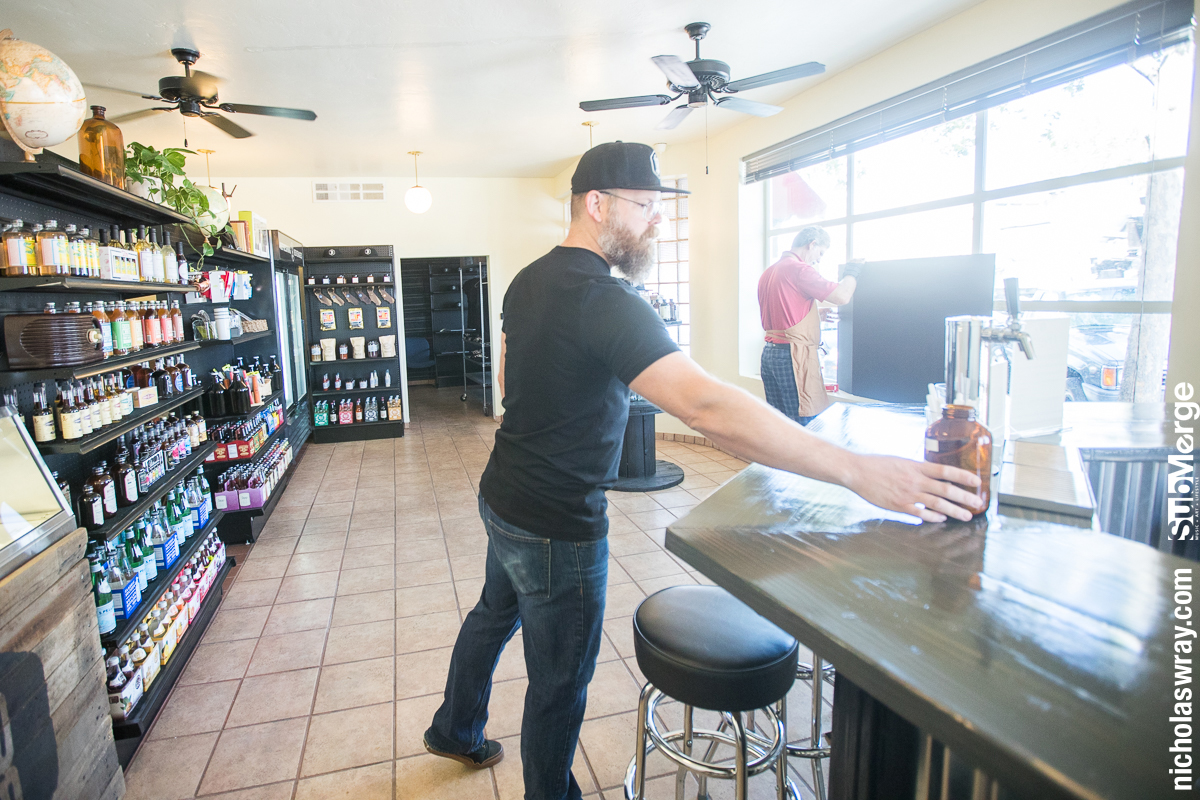 After you started messing around with ginger beer did you try your hand at other sodas?
I started experimenting with different things like root beer, ginger beer, cream soda and an old switchel I found in my travels. I started getting pretty good at it, but kept having all of these explosions in our house.

Explosions?! What do you mean?
You have to over-sugar soda so that when the yeast eats the sugars, by the time you are ready to open [the drink] and consume it there is still enough sugar for it to be soda. We were using our linen closet [for storage], because it kept a good temperature, and one night we were watching The Walking Dead, and I had a soda experiment in there that I forgot about; then all of the sudden during a peak moment in the show—boom! The linen doors fly open and all this foam and glass start spilling out everywhere, and I realized if I ever did want to sell this to the public, it’s just a time bomb.

Wow! So was that when the syrups came into the picture?
Yeah, there aren’t a lot of soda companies doing what I’m doing. There are a lot of shrub and cocktail companies that make their own syrups, but there aren’t very many people making syrups specifically designed to make sodas at home. And so I was like, “I can do that!”

When did you decide to expand from being solely a production facility to opening a tasting room?
I used the building as a production facility for a long while, then started going to the Del Paso Partnership meetings, and they told us it was great that we’re here and they love that we’re on the boulevard, but asked if we could open a storefront since they are a business district and want foot traffic. So, the store was sort of an afterthought, but only because we were focused on production.

Seems like it turned out to be a blessing in disguise.
Yeah, I really do think what the partnership is trying to achieve with getting foot traffic out here is what really is going to make the current revival stick. And now we get to sort of follow Jason from Preservation & Co.’s model of wholesale, retail and a commissary, because now we also rent our kitchen out to caterers. We’re kind of trying to do what he did for us as long as we can.

How do you come up with your recipes?
I really started to get geeky about the history of soda. That’s when I found the recipe we base our cream soda off of. It’s from the late 1850s, which is one of the earliest recorded soda recipes that I found, and it’s so different from the cream soda that we know today. It’s similar enough to be called cream soda, but when soda was in the saloons, a cream soda would be any soda where they would put a dollop of heavy cream or cream of tartar into it. Our recipe does have cream of tartar in it. We also use real vanilla bean, cinnamon bark, Thompson raisins, a little lemon juice, apple cider vinegar and Turbinado sugar. It’s a little more complex and almost horchata flavored with the cinnamon and raisins.

Do you recommend a particular seltzer water to use with your syrups?
Any seltzer water works; La Croix works well. I like the flavored La Croix so that I can make new flavors. I use our pineapple nutmeg with their coconut to make a pina colada flavored soda, but the ginger beer and the shrubs are the only ones I recommend playing around with. I can’t imagine the root beer and cream soda mixing well with flavored soda water. Also, the Safeway brand Refresh is really good, too, because it has a big bubble. I like seltzer water that has a big bubble because when you add syrup to it, it doesn’t dumb down the bubble too much.

Do you have any tips or techniques when adding your syrups to seltzer water?
The colder you get both of them the less bubble loss you’re going to have because particulate matter—which our syrups have—give gas an escape point, so you’re losing some carbonation there.

Well, I can’t wait to try all of the syrups and do some experimenting! Do you see the business quickly expanding outside the area?
All I’m focused on now is Sacramento. We have so much more work to do here!