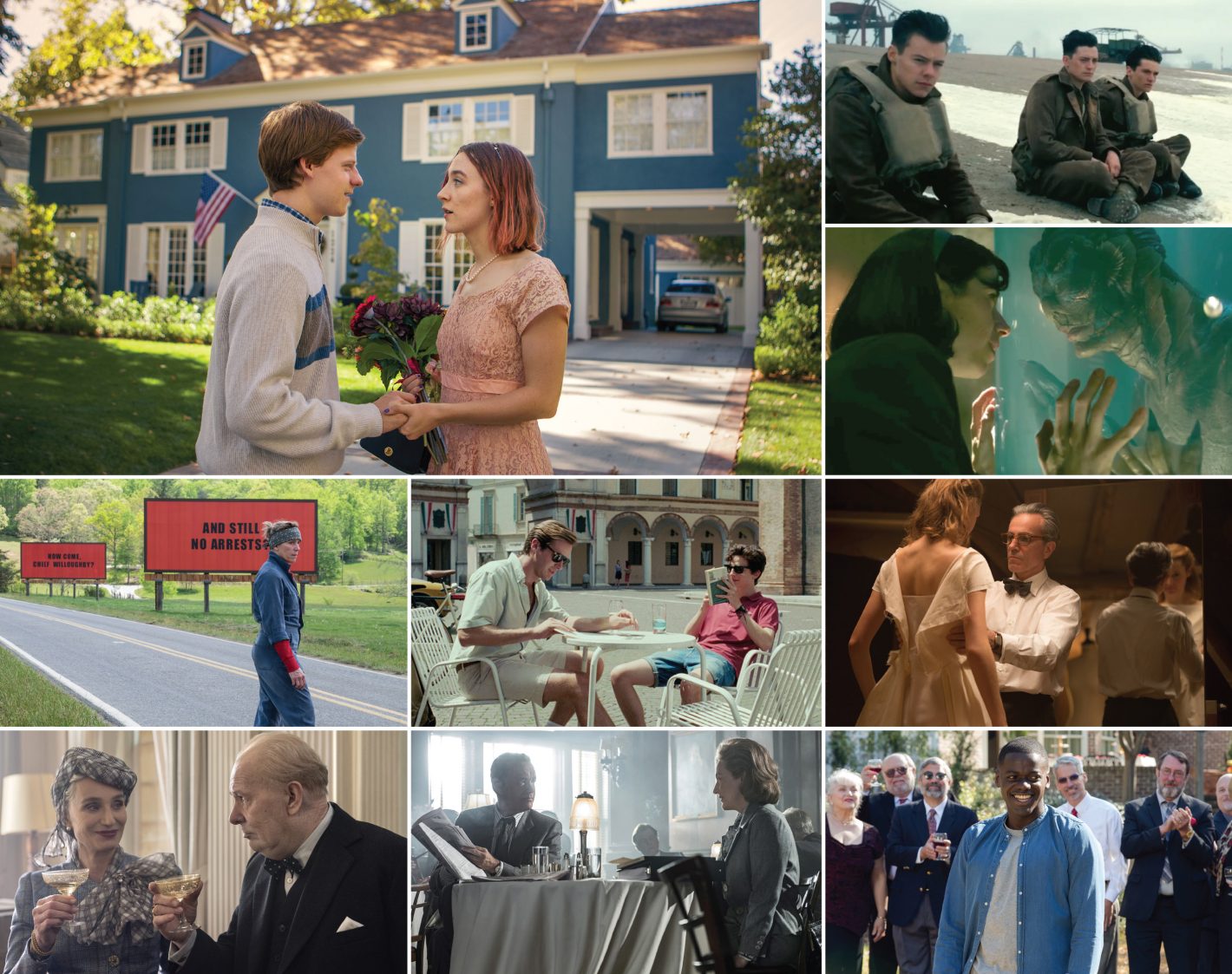 The 90th Academy Awards take place Sunday, March 4 at the Dolby Theatre in Hollywood, with Jimmy Kimmel of Win Ben Stein’s Money fame hosting. Lady Bird—maybe you’ve heard where it was filmed?—received five nominations, including the nod for Best Picture. The last time Sacramento had this much at stake in Los Angeles was the Kings-Lakers Conference Finals in 2002.

It’s a wide open Best Picture field, with nine nominees. Unlike other categories, Best Picture voting uses the preferential ballot. Rather than choosing one winner, voters rank all nine nominees in order, which tends to reward films that garner widespread appreciation over more divisive options. Would have been a nice format to have around in say, November 2016, but at least it gives Lady Bird a pretty good shot. Here’s what we’re up against!

A passionate pursuit of justice in which every character simply refuses to take any shit. Best Actress favorite Frances McDormand spent a year eating rusty nails to prepare for this role (probably), while Woody Harrelson and Best Supporting Actor frontrunner Sam Rockwell play cops on very different ends of the is-it-OK-to-kneel-during-the-national-anthem spectrum.

Why Lady Bird wins: Location, location, location. Yeah, Three Billboards took best picture at the Golden Globes, SAG and BAFTA. But not even Greta Gerwig can make you appreciate Sacramento as much as spending two hours in the hellhole that is Ebbing, Missouri. Plus, if it were “3 Billboards Outside Sacramento,” Kaiser would just buy the billboards and the credits would come 11 minutes in.

Call Me By Your Name

A visually stunning piece of cinema set in the Northern Italian countryside—maybe the only place in the world more beautiful than Sacramento. It’s a scintillating love story that has a lot to teach the farm-to-fork capital about the different ways one can use a peach.

Why Lady Bird wins: Age of majority. You may recognize Timothée Chalamet as the broody adolescent anarchist to whom Lady Bird lost her virginity, when they were both in high school. In his role in Call Me By Your Name, for which he’s a dark horse Best Actor candidate, Chalamet plays a 17-year-old in a love affair with a 24-year-old. Above Italy’s age of consent? Sure. But “Call Me When You’re 18” may have been more ethically pleasing.

Also known as “PTSD: The Movie,” Dunkirk is an optically intense war thriller shot in 70mm. Director Christopher Nolan tunes out the text and turns up the technique, leaving you fully immersed, at least until you see Harry Styles in his new boy band, the British army.

Why Lady Bird wins: Internal > external conflict. Aerial dogfights and capsized carriers are cool, but what about the inner turmoil of a young woman struggling to get in her touch with the artist within her? Styles or no, Dunkirk is going in One Direction: down.

The Shape of Water

Let me save you some time: it’s a parallelogram. In this ode to Old Hollywood, Sally Hawkins portrays a mute woman with a performance that speaks volumes. Plus, when is fish fornication not fun?

Why Lady Bird wins: Originality. Rumors abound that director Guillermo del Toro “stole” the plot for The Shape of Water from a 2015 Dutch student film, The Space Between Us, or “obviously derived” it from Pulitzer-winning playwright Paul Zindel’s 1969 play Let Me Hear You Whisper. Most likely it’s just a common storyline, but that’s sort of the point: it’s hard to imagine Lady Bird being created in 1969, in the Netherlands, or by anyone else at all.

The much-esteemed method actor Daniel Day-Lewis announced that Phantom Thread would be his final film, so he’ll now forever be stuck portraying a famous London fashion designer who hates the sound of toast. Paul Thomas Anderson, the best director to never win Best Director, transports you to a land of gorgeous gowns far removed from the worlds his work has previously inhabited.

Why Lady Bird wins: Levity! At one point Day-Lewis’ character proclaims “There is an air of quiet death in this house.” The same can be said for Phantom Thread. Lady Bird had a laugh for every tear shed, and sometimes people need to breathe.

Gary Oldman was born to play Winston Churchill. He just had to wait until he was an actual old man to do it. He’ll win Best Actor easily. But in 2018, Darkest Hour may have been better served as an episodic Netflix documentary called “The Gary Oldman Show.”

Why Lady Bird wins: Brevity. I felt a bit deceived by the title, because Darkest Hour comes in at a hefty runtime of two hours and five minutes. Interestingly, the hour in question takes place concurrently with Harry Styles and company’s embankment at Dunkirk. Had they been given entertainment options, they’d likely have gone for Lady Bird’s neatly edited 95 minutes.

A movie about the strange, overly informative Facebook post a friend of yours made that’s got everyone in your social circle talking. OK, you got me. There are nine nominees! I haven’t seen this one yet. But with Steven Spielberg, Tom Hanks and Meryl Streep in tow, it’s so familiar I’ve probably seen it a dozen times already.

Why Lady Bird wins: Well I didn’t see The Post, but I saw Lady Bird twice. That should count for something.

Smart, scary, satirical and—oh yeah—hilarious, Jordan Peele’s directorial debut was a striking success that we can all learn a lesson from—never meet your girlfriend’s family.

Why Lady Bird wins: History. Whether you consider Get Out a horror or a comedy (trick question, it’s a documentary), neither genre traditionally gets the respect it deserves from the Academy, not to mention that February nominees struggle from recency bias. That may be enough to send Get Out to the sunken place.